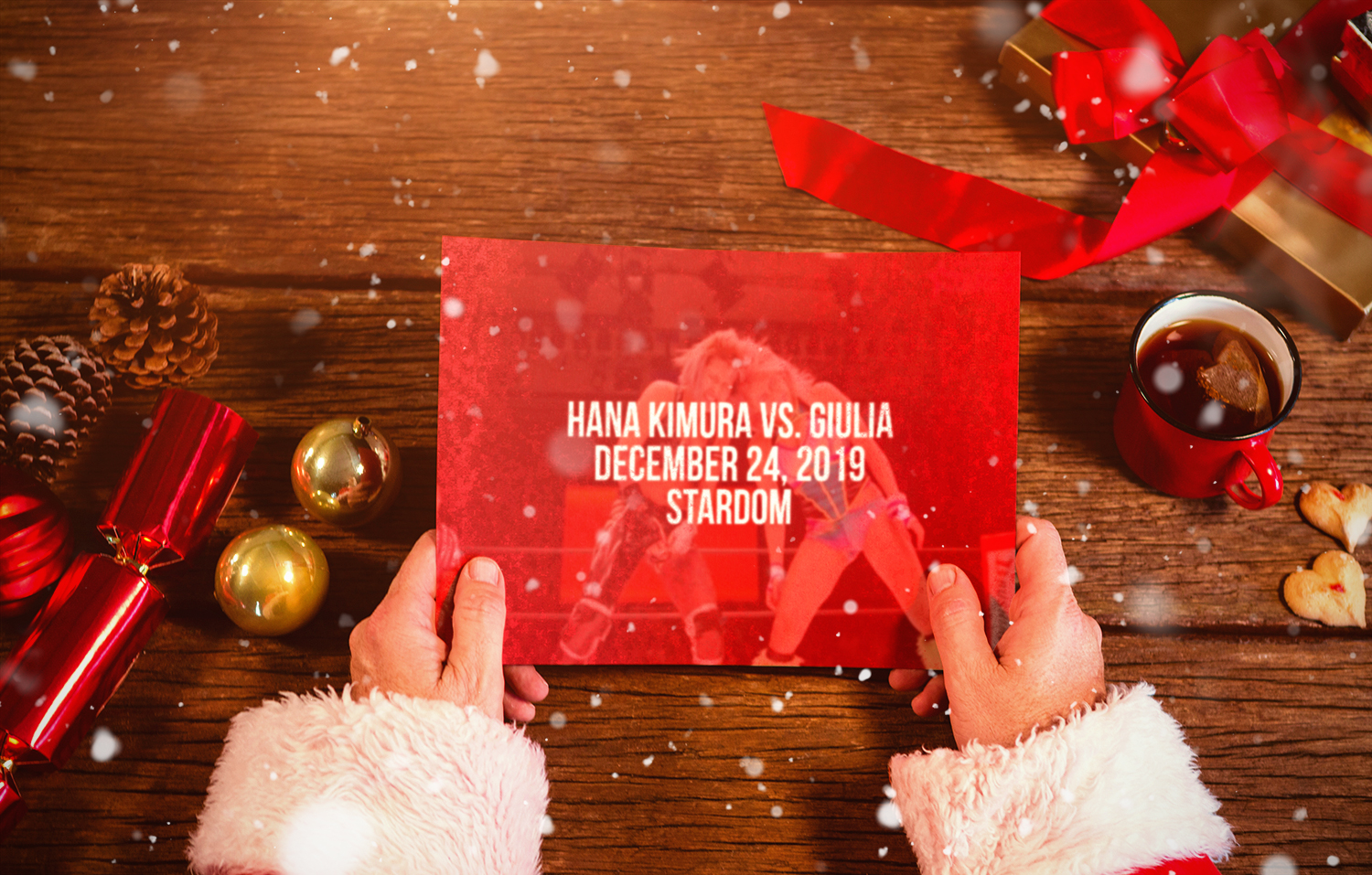 It’s the most wonderful time of the year…

First off, I have to thank my Secret Santa for giving me a joshi match so that I can plug that I am one half of the world’s #1 joshi podcast, Jumping Bomb Audio, available on the wonderful Voices of Wrestling Podcast Network.

I had watched this match before, back when it first happened in December of 2019, and it felt at the time like a really monumental match. Giulia had just controversially jumped from Ice Ribbon, Bushiroad had purchased Stardom (at one point during the match they actually cut to Kidani in the crowd) and it felt like Stardom was on the cusp of a brand new era. It’s hard to believe looking back all the things that have happened in the last two years, both in and out of the company. Mere months later, the whole world would shut down and the energy that seemed to be building around Stardom seemed to dissipate for a time. Although they’ve returned to some great success, it will never feel like these moments did, moments where it felt like Stardom was going to truly take over the world. Over 1,300 people packed into Korakuen, yelling and screaming for both Giulia and Hana (remember yelling and screaming?) is something that just can’t quite be duplicated no matter how hard you clap.

The second thing that happened, and maybe the easiest to predict, was Giulia becoming a star. Portions of this match feel like an attempt to hide the deficiencies that still existed in Giulia’s in-ring ability at the time, as both competitors brawl around the ring, throwing chairs and using vicious slaps and headbutts, but it’s clear from the get-go that Giulia had that extra spark that most wrestlers don’t have. The match is vicious, and Giulia goes blow for blow with Hana, never backing down and really putting herself on the map in Stardom. In the intervening months, Giulia’s in-ring skill caught up with her unbelievable charisma and she’s become one of, if not the top star in the whole company.

The hardest to predict would be the death of Hana Kimura. Kimura was in many ways the heart and soul of Stardom, and her presence is missed on every show, even as the months stretch into years since she left us. In truth, this was the first Hana Kimura match I’ve watched since she died, as for a long time I couldn’t bring myself to watch. Knowing this was my first Hana match in over a year, I thought that I might be reminded of things I had forgotten about her personality and the way she wrestled, but she was exactly as I always remembered – an incredible wrestler whose personality and charisma had the crowd enraptured no matter what she did. She, like Giulia, was destined for stardom, and as much as it will always sadden me that we never got to see the completion of the journey, it brought me joy that matches like this will live on for years to come.

As for the match itself, it’s a doozy. It’s hard-hitting and brutal, and it feels epic in a way that many current Stardom matches try for, but can’t quite achieve. It also is the rare match that makes both competitors look stronger, as they both mount impressive offense at times and fend off equally potent offense from their opponent. Yes, it ends in a time limit draw (I HATE TIME LIMIT DRAWS IN STARDOM), but this one feels earned and not just a cheap way to get out of someone taking the loss. Also, at 15 minutes, it goes by incredibly quickly and there is no wasted movement or time as both competitors surge ahead, trying to get the victory. Overall, an incredible bout, not just for the in-ring (and out of ring) action, but also for a look into a recent past that looks very different than our present. **** 1/4