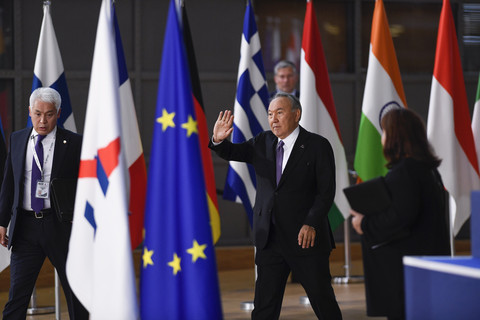 The EU’s top diplomat on Thursday (6 January) in veiled comments warned Russia against military intervention in neighbouring Kazakhstan, where protestors have been calling for a change in government.

Cities across Kazakhstan have seen the worst street unrest since the country gained independence from the Soviet Union 30 years ago.

“Rights and security of civilians must be guaranteed. External military assistance brings back memories of situations to be avoided,” he said, adding that the “EU is ready to support in addressing this crisis”.

Dozens of people, including citizens and police officers, have been killed, with thousands arrested in the capital, Almaty and hundreds more injured.

By Thursday evening, military personnel had regained control of the main airport, seized earlier by protesters, but battles continued between security personnel and protestors in Almaty’s main square, Reuters reported.

Demonstrations began over the weekend sparked by rising fuel prices.

Soon they turned into anti-government protests, fed by resentment of more than three decades of rule by 81-year-old ex-president Nursultan Nazarbayev, and unequal distribution of the country’s vast mineral wealth.

But as the protests grew, he changed tactics and invited troops from a Russian-led military alliance of former Soviet states into Kazakhstan to restore order.

Russia has sent some 2,500 personnel, the Russian RIA news agency has reported.

The operation is its first military action, and an indication that Kazakhstan’s neighbours, particularly Russia, are concerned that the unrest could spread, AP reported.

The CSTO’s general secretary, Stanislav Zas, rejected as “complete stupidity” suggestions that the troops would act as occupiers rather than peacekeepers.

Ukraine talks to go on

Moscow’s involvement comes as massive number of Russian troops are simultaneously massed at the border of Ukraine, causing international concern and prompting talks between Washington, Moscow and Nato.

The US “is closely monitoring” the Russian troops in the central Asian country, the state department said.

“The US and, frankly, the world will be watching for any violation of human rights,” a state department spokesman said.

“We will also be watching for any actions that may lay the predicate for the seizure of Kazakh institutions,” he added.

However, the unrest in Kazakhstan and Russia’s involvement in putting down the protests will not affect plans for Nato’s talks with Russia next week over Ukraine, White House press secretary Jen Psaki has told reporters on Thursday.

She added that the US has “questions about the nature of this request [from Kazakhstan] and whether it was a legitimate invitation or not.”

“The world will, of course, be watching for any violation of human rights and actions that may lay the predicate for the seizure of Kazakh institutions,” Psaki said.

The US and its European allies are to hold three sets of talks with Russian officials next week starting with a meeting in Geneva.

Moscow is seeking security guarantees from Nato, which would essentially limit the defence capabilities of the Western military alliance in eastern Europe.