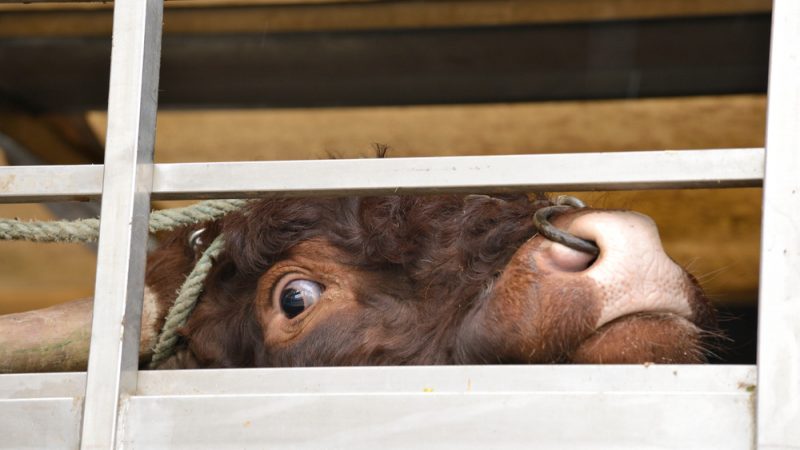 Members of the European Parliament have a unique chance to drastically improve the lives of animals during transport. They need to take it, argue Tilly Metz and Anja Hazekamp.

Tilly Metz is a Green Luxemburgish MEP, chair of the European Parliament’s committee of inquiry on the protection of animals during Transport (ANIT).

Anja Hazekamp is a leftist Dutch MEP, vice-chair of the European Parliament’s committee of inquiry on the protection of animals during Transport (ANIT) and honorary president of the Animal Welfare Intergroup.

The majority of animals transported in the EU are subjected to cramped conditions, lack of hydration and food,  and journeys of up to 29 hours, or in case of transport via sea, even days and weeks, without the possibility to rest.

Every year over 1.5 billion animals are transported alive across the EU or from the EU to third countries, while the current Animal Transport Regulation is too often infringed and does not ensure effective protection to animals.

This is unacceptable and confirmed by the European Parliaments’ Committee of Inquiry on the protection of animals during transport (ANIT).

In the first month of 2022, we MEPs can use our vote and call on the European Commission and the member states to end this cruelty and suffering.

As European lawmakers, we can send a strong message to our constituents that we are prioritising animal welfare in the 21st century by calling for modern and compassionate legislation that guarantees the wellbeing of animals.

We simply cannot afford to wait any longer. This is the year in which we can make a substantial and pivotal difference. Waiting or missing the opportunity would be a dereliction of duty.

Before, as well as during the ANIT committee’s mandate, we witnessed multiple live animal transport disasters.

The year 2021 started with the disasters of Elbeik and Karim Allah, with 2600 Spanish cattle stuck at sea for several months and eventually killed in the original country of departure.

This was followed by the Evergreen blocking the Suez Canal, causing thousands of animals to suffer onboard transport vessels that could not continue to be transported.

Even when journeys are not prolonged by outside circumstances, investigations from NGOs have shown that requirements regarding outside temperature, space per animal and break times, are frequently violated.

This lack of enforcement causes unnecessary suffering to thousands of animals every year.

On many occasions, permits are signed off despite it being obvious from the beginning that legal requirements cannot be adhered to on the planned journey.

And while in theory, the EU Regulation has to be respected until the final destination, also if that destination is outside of the EU, it is impossible to enforce and control this in practice.

Beyond recurring tragedies and constant infringements, the current legislation on protecting animals during transport is not sufficient, even if it is upheld perfectly.

Unweaned animals, barely able to walk, are even transported for many hours without being fed, leading to repeated violations of the law.

Unweaned calves are not able to use drinkers onboard most trucks and it is impossible to provide them with feed, milk and water during transports.

Pregnant animals are even transported beyond 90% of the gestation period, leading to animals giving birth during transport.

And other vulnerable animals, such as chickens, turkeys, rabbits, fish, dogs and cats, lack species-specific legislation, leading to unnecessary suffering during transport.

What we need is species-specific legislation that meets the needs of individual animals.

And the future of European animal agriculture must include decentralized production systems, where animals can be raised, reared and slaughtered locally.

All transport of live animals should be as short as possible and local supply chains must be favoured. We have to end long-distance journeys, transports to third countries and transports via sea.

Those simply cannot be done in a way that ensures the animals’ welfare. We need to transition to transport only of meat and carcasses and semen instead of living animals.

And pregnant or lactating animals, or individuals that are at the end of their production period, are particularly fragile and should not be transported for long hours.

The upcoming vote in the European Parliament on the ANIT recommendations could be a milestone on the journey towards better protection for animals during transport.

This is our chance to call on the European Commission to revise and change Regulation 1/2005 for the better. We owe it to the animals, to the European citizens and to future generations to adopt strong recommendations.

Personally, we will vote in favour of kinder and more sustainable methods and against any attempts to weaken the recommendations as adopted by the ANIT committee.

We urge all members of the European Parliament to do the same.