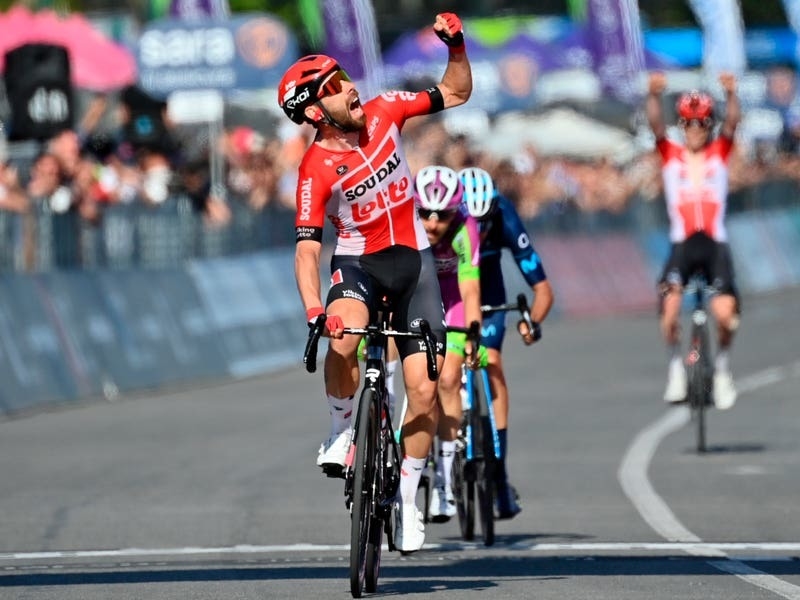 Thomas De Gendt received stage eight of the Giro d’Italia as Guillaume Martin used a breakaway to vault his manner as much as fourth within the total standings.

De Gendt accelerated previous Davide Gabburo and Jorge Arcas with 200 metres to go on the seafront in Napoli to get his reward for splitting up the break and carrying clear a four-man group which additionally included his Lotto-Soudal team-mate Hurt Vanhoucke.

Cofidis’ Martin adopted the pre-stage favourites Mathieu van der Poel and Biniam Girmay 33 seconds down, three minutes forward of the chasing peloton to maneuver up from 14th within the basic classification to fourth, now 66 seconds behind Trek-Segafredo’s Juan Pedro Lopez who held on to pink going into Sunday’s stage on Blockhaus.

Stage one winner Van der Poel tried to go solo with 46km nonetheless to go, however De Gendt led a counter which efficiently bought clear, and would keep away regardless of a livid try from Van der Poel and Girmay to get again contained in the final 10km.

“Mathieu attacked on the steep part on the second to last lap and went really hard but we made it back and made an attack,” De Gendt stated. “We knew everybody would look to Van der Poel and Girmay to shut the hole so we took the benefit they usually stayed at 30 seconds again.

“I was working for Harm to attack on the last climb but he said he did not have good legs so I said to him, ‘Ride to the last 3km and I’m sure I will win the sprint’ and he did it perfectly. I’m happy we could pull this off as a team.”

This was De Gendt’s second profession Giro stage, 10 years after he took his first on very totally different terrain on the Stelvio.

“If you had asked me two weeks ago if I would be able to win a stage in the Giro I would say no, I was in such terrible shape,” he stated. “But now the good legs are coming.”