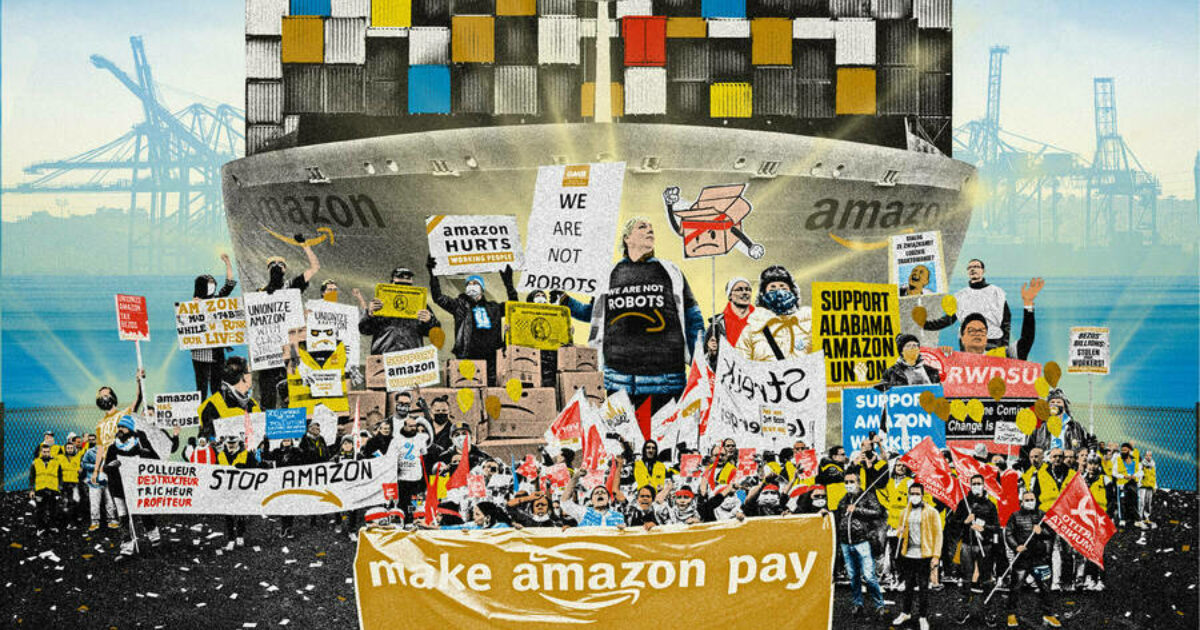 We’re down to the final days of our important fundraising drive of the year—and for the next 24 hours, all donations will be matched by a group of fellow In These Times readers. After you’re done reading, please consider making a tax-deductible donation to ensure that In These Times can continue publishing in the year ahead.

The story of the past two years has been, in many ways, one giant labor story — played out against the backdrop of a global pandemic. But when we took a look at the labor stories In These Times published over the past 12 months, what stood out most were how inspiring and hopeful many of them ultimately were. These are stories of people organizing together, at great risk, in the most precarious of times and against long odds, and winning.

We invite you to take some time this holiday weekend to revisit some of these stories — or read them for the first time. They’re a snapshot of the year that was, but they also point the way to what might be coming in 2022 and beyond.

1. ​“We Are Emptying Out Their Shelves”: Nabisco Workers’ 5‑Week Strike Won by Shutting Down Business as Usual

A beaten-down workforce took on a powerful company — and won.

Workers made a fortune for shareholders over the last six-year contract. They should demand that they get paid their true worth before shareholders get a penny.

A union set to be wiped out by layoffs says politicians are missing in action.

Students are demanding the university lower the cost of attendance and boost financial aid.

5. When These Workers Unionized, Their Cafe Was Put Up for Sale — So They Bought It
Harry August

In 10 months, baristas at White Electric, a coffee shop in Providence, went from unionizing their workplace to starting one of only a few dozen worker-owned cafes in the country.

6. Capping Off a Year of Labor Action at Amazon, Warehouse Workers Walk Off the Job in Illinois
By Jeff Schuhrke

For the first time, Amazon is experiencing a multi-site U.S. work stoppage. It comes at the end of a year marked by union organizing and labor militancy at the retail giant.

7. At a Major Education Company, Freelancers Must Now Pay a Fee In Order to Get Paid
By Hamilton Nolan

McGraw Hill is clawing back 2.2% of every invoice, and a worker says it feels like ​“wage theft.”

8. Against Loving Your Job
By Sarah Jaffe

“We need a politics of time. A political understanding that our lives are ours to do with what we will.”

10. In Middle America, Unions and Democrats Are Sleepwalking Into the Grave
By Hamilton Nolan

By not organizing in decimated post-industrial towns, we’re ceding ground to the right wing.

The Labor Movement Has a Game Plan for the Biden Era

This time, unions intend to get something done.

Amazon workers from Italy to India are uniting to form a global movement that may have found Jeff Bezos’s Achilles heel.

No Justice, No Italian Beef: Workers at Portillo’s Food Chain Walk Out on Strike
By Jeff Schuhrke

A group of non-unionized workers at the Chicago-based chain staged a week-long walk out, part of a growing wave of strikes in the area.