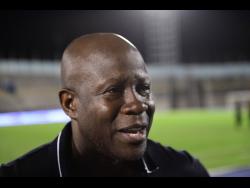 Amid speculation of his resignation and another feud between the national senior men’s players and the Jamaica Football Federation (JFF), interim head coach Paul Hall says that his immediate focus will be doing everything he can so that the team can face and beat Suriname tonight in their second Nations League game at the National Stadium at 8 o’clock.

The Reggae Boyz drew with Suriname 1-1 on Saturday night in Paramaribo, Suriname. However, the past 48 hours after the game saw players and the JFF once again at odds following faulty travel arrangements which led to delays in their arrival in Jamaica. The incident resulted in the players demanding the resignation of general secretary Dalton Wint. Following an emergency meeting of the JFF board last night Wint decided to hand in his resignation.

The team arrived home yesterday morning a day later than scheduled and the players then released a statement vowing that they will “no longer represent the country” until Wint resigns.

Focus on the game

While not speaking on the matter, Hall in his pre-game press conference yesterday afternoon said that he is determined to ensure that the game does go ahead and that they complete the job against Suriname which they were unable to do on Saturday.

Junior Flemmings had scored in the 39th minute but an Amal Knight own goal in the 84th minute forced a stalemate.

Reports had surfaced that Hall considered resigning because of the events. However, when asked about his status as coach, Hall said that he would be on the sidelines tomorrow for the game although he did not say anything about the long term.

“I can’t speak about non-football matters. All I can say is that I will be there on the sidelines on the pitch tomorrow (today) giving my all because that is what we do. It’s really important that everybody is behind this team,” Hall said. “We know how important it is for Jamaican football. We know how important it is to have fans in the stadium. Everybody needs to get behind this team. Yes, I will be there tomorrow 150 per cent.”

Hall is the leading candidate to take over the job permanently after taking over on an interim basis in December, following Theodore Whitmore’s firing.

Hall insisted that they will be relentless in attack in their Nations League home opener and expects to have his attacking options expanded with players such as Shamar Nicholson, Jamal Lowe and Ravel Morrison now available for the game. They were absent in Suriname because of travel issues.