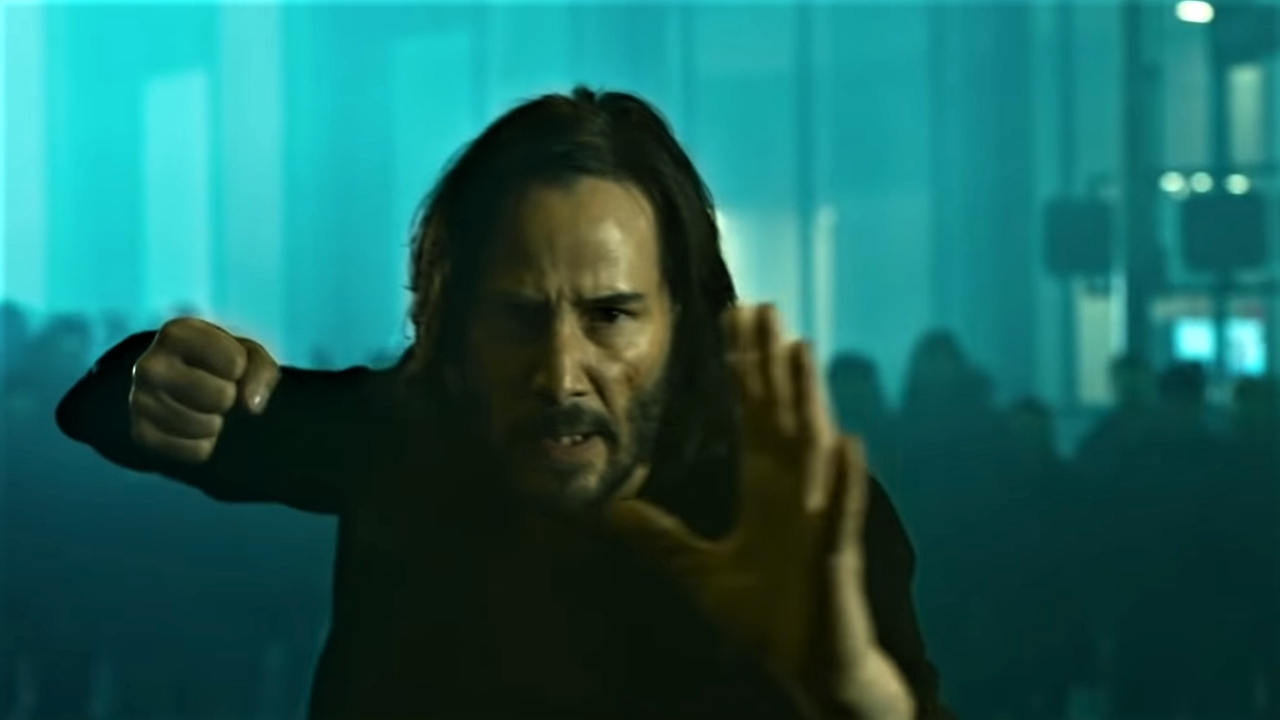 It’s hard for a Reason editor to hate a film that ends, as The Matrix Resurrections does, with a hero triumphantly declaring that “it’s easy to forget what a free mind can do,” and suggesting that one possibility might be to “paint the sky with rainbows.” And it’s even harder when that film is an ambitious and long-awaited sequel to the Matrix trilogy, an era-defining, all-time pop-culture classic that redefined big-budget action cinema for a generation.

Yes, the film, directed and co-written by Lana Wachowski, one of the siblings behind the original series, offers a continuation of sorts to the sci-fi trilogy that ran from 1999 to 2003, with familiar actors and characters, including star turns from Keanu Reeves as Thomas Anderson/Neo and Carrie-Anne Moss as Trinity. Yes, it occasionally delivers gravity-defying action visuals of the sort the original trilogy was famous for (though none of the new sequences reach franchise highs). And yes, there are layers of callbacks and cameos and Easter eggs for the superfans.

But Resurrections is far less concerned with delivering on the usual promises of a long-awaited franchise sequel-cum-reboot and more focused on interrogating the premises that inevitably power such productions. It’s a weird, fascinating, frankly bizarre movie about The Matrix‘s legacy, and the demands of pop culture success. This isn’t a sequel to The Matrix so much as an elaborate cinematic thinkpiece that attempts to answer the question: 20-some years later, why in the world are we getting a sequel to The Matrix?

Insofar as the movie provides a concrete answer, it’s because the movie studio suits demanded it. This notion is not subtext or metaphor; it’s literally built into a scene early in the film.

For in this version of the Matrix (the online-esque virtual world used by sentient machines to keep human minds occupied while human bodies are used to power their robot civilization), Thomas Anderson still exists as a programmer. But this is where things get weird, and some spoilery explanation of the film’s ultra-high-concept conceit is required.

Instead of a lowly corporate drone, Anderson is now the chief creative at a major video game company, a beloved figure in the world of gaming because two decades earlier he invented a game called…The Matrix.

This game is almost exactly the same as the 1999 movie that launched the film franchise here in the real world, with the same characters, key scenes, and dialogue. And those scenes and images both haunt him and define him, breaking into his reality and making him a rockstar for gamers of a certain age who loved his youthful creation.

Our hero, then, is a man consumed by the long tail of The Matrix, whose identity is forever associated with it, and who is also trying to escape its pull. As he tells his psychiatrist, The Matrix—the video game he invented—”took over his life.” When we first meet him, he’s working on a new game, but work is going slowly and the project isn’t taking shape. So his business partner (Jonathan Groff, who is delivering quotes from the first Matrix when we first meet him) informs him that he’s been tasked with creating a sequel to The Matrix.

Tasked by who? Groff’s character explains that this project was handed down by the game company’s corporate owners at Warner Bros.—the same movie studio that owns the original Matrix trilogy here in our real world, and thus the same studio that produced this year’s sequel. The deal, Anderson is made to understand, is that the studio is making a sequel with or without him, and that he would thus be advised to participate.

You can already see the metaphor taking shape: This is a Matrix movie about the making of a Matrix sequel, with Anderson/Neo setup as a stand-in for the original film’s creators.

And thus it is built around poking fun at the inevitable demands for a Matrix sequel, and the process by which one comes together. So we get scenes of irritating creative types brainstorming what a new Matrix game would need—a “new bullet time” to update the earlier film’s signature visual, story elements that lend themself to kaleidoscopic interpretation so as to maintain cultural relevance, and so on and so forth.

Meanwhile, nearly every scene in the first two hours of the running time is devised as a direct callback to a similar scene from the original trilogy, often with direct quotes or repeated images, which plays like an extended gag about the ways that sequels are expected to recycle and remix their predecessors.

If this sounds like a curious and unnecessarily complex gimmick on which to build a zillion-dollar action blockbuster, well, that’s probably because it is. This is a meta-movie, not only about itself, but about how all franchise films inevitably become about themselves. In that way, it’s rather timely, since it follows so closely on the heels of Spider-Man: No Way Home, an incredibly insular, fan-service-laden franchise sequel built entirely around pre-existing fan appreciation for the various cinematic iterations of Spider-Man. But where No Way Home simply delivered on the self-referentiality that is now de rigueur for such sequels, The Matrix Resurrections attempts to reveal that self-referentiality, exposing it at every stage of the process, almost like a Penn & Teller magic trick—even while doing exactly the thing it must do.

There’s an amusing and frequently clever self-mockery to the proceedings. And if nothing else, the movie is a fascinating experiment in franchise deconstruction. It’s worth seeing for its goofy audacity, especially if you’re a fan of the originals.

But ultimately it doesn’t all hold together. Partly, that’s because Wachowski and co-screenwriters Aleksandar Hemon and David Mitchell don’t quite seem to know what they want to say with their meta-movie narrative device aside from: Hey, look at this meta-movie gimmick!

And partly that’s because, with one possible exception at the end, none of the action scenes have the visual clarity, expert pacing, or iconic confidence that made the original trilogy’s big action scenes so memorable and influential. Indeed, whenever the action scenes nod to comparable moments in the original series, the connections almost always serve as reminders of how good those action sequences were, and how muddy and uninspired most of this movie’s big action beats are. As an action blockbuster, the new film is a disappointment.

The Matrix Resurrections is an odd psycho-analysis of The Matrix‘s cultural footprint more than a true Matrix successor. I enjoyed its bold weirdness, but while I’m always ready for a lively thinkpiece about The Matrix, like the one Kat Rosenfield recently penned for Reason, I wish Lana Wachowski had freed her mind from the constraints of the original a little more.