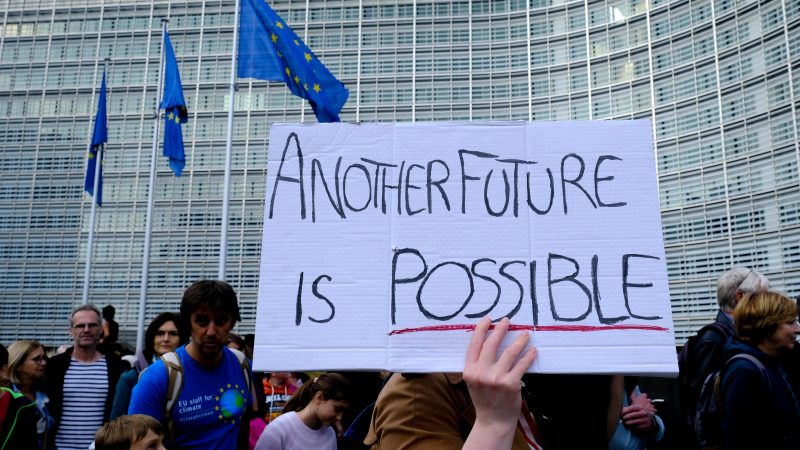 In the recent years there has been much talk about the erosion of liberal democracy, which has been manifested in various disturbing developments: from decreasing trust of citizens in the institutions of representative democracy and decreasing voter turnout (in particularly among the lower third socioeconomic group of the population) to the growing political and societal polarization and the rise of the populist radical Right that promotes ethnic nationalism and attacks civil rights and individual liberties. In general, these developments have often been portrayed as signs of citizens’ dissatisfaction with democracy.

Filip Milacic is a senior researcher at the Friedrich ­Ebert­ Stiftung’s office for “The Democracy of the Future” in Vien­na. His new book on democratization in Eastern Europe will be published this year by Springer.

Yet citizens’ decreasing satisfaction with how democracy works should not per default be understood as their alienation from democracy as a system of government. A change in the expectations from democracy is a plausible explanation as well.

Accordingly, ordinary citizens are dissatisfied because they do not wanter their role in political processes to be reduced to solely participating on the elections and thus be largely excluded from politics. Hence, democratic reforms are needed that would enable citizens not only to be more involved in the decision-making process, but in the will-formation process as well.

In this regard, a relatively new form of citizens’ participation – citizens’ assemblies – could be a part of the solution. But as the panelists of the last year’s Hambach Democracy Dialogue agreed, the biggest enemy of deliberation is a bad deliberation. Therefore, certain preconditions must be fulfilled for citizens’ assemblies to have a positive influence on democracy.

The implementation of citizens’ assemblies

On the input side, first of all, the topic and the task should be well defined. Moreover, by selecting participants for the assembly via lottery procedure it must be ensured that the members of all parts of the society will take part in the assembly’s work, in particularly certain disempowered groups. The representative sample should not duplicate representation deficits of current institutions of representative democracy.

With respect to the throughput, a non-partisan organization, which is in charge of the implementation of citizens’ assembly, should ensure enough time for learning, consultation, and deliberation. During these three phases the citizens receive an input from experts and stakeholders, exchange with broader public, and discuss and evaluate newly acquired knowledge.

In addition, the internal communication process must be organized and moderated in such a way that all participants can contribute equally regardless of their social background. It is also crucial for the legiti­mation and acknowledgement of the outcomes of a citi­zens’ assembly that the public is informed in greater detail about its composition and activities.

If the broad public is not familiar with the whole process or does not ap­prove of it, the citizens’ assembly could be politically margin­alized. Media coverage is thus essential so that the work of citizens’ assembly becomes a part of the ‘breakfast discussions’.

Finally, there should be no ambiguities about the citizens’ assembly’s relationship with the political actors – whether it is a part of the decision-making process or it just has an informative character – and subsequently what is to be done with its output (recommenda­tions). Otherwise, the whole project runs the risk of being instrumentalized by political actors or of gain­ing no traction at all and simply serving as placebo.

The Conference on the Future of Europe

How does the Conference on the Future of Europe (CoFoE) fare with respect to these criteria?

I will start with the input. Being composed of randomly selected citizens from all over European Union, and reflecting other relevant criteria (age, education, and rural/urban division), the CoFoE is satisfactory representative of the European society. Yet having in mind the topic and in order to counter the allegations of biasness, one should have perhaps included additional criteria for the selection of the participants such as the attitude toward the EU.

Moreover, a multilingual digital platform acted as the main entry point for shaping the agenda of the conference, which is controversial since the kind of platforms usually enjoy a limited representativeness. The historical experiences show that already politically active and privileged groups tend to be overrepresented. Indeed, the issue of self-selection and its, from the perspective of representativeness, negative influence on the agenda has already been identified as a weak spot of similar deliberative processes, with well-defined solutions to the problem still lacking.

The agenda’s scope turned out to be more problematic for the whole process. The agenda being comprised of a wide range of topics such as education, employment, digitalisation, democracy, security, environment, climate change, health, foreign policy, and migration is simply too broad. As a consequence, such an agenda has been negatively affecting the throughput element of the process. The topic overload led namely to the lack of time for crucial phases of the process – learning, consultation, and deliberation -, which in turn affected the nature of recommendations (output).

Unsurprisingly, many recommendations would require changes to treaties, which is why they could more easily be ignored by the political actors – especially by already skeptical governments. Such recommendations facilitate the cherry-picking approach as well. This is in particularly troubling since the design of the CoFoE foresees that in the plenary, composed of representatives of various European and national institutions and ordinary citizens, the latter are not in the driving seat when it comes to the selection of the proposals to be sent to the decision-makers. They can hardly count on the bottom-up pressure by the ordinary European citizens as the activities of CoFoE’s are still largely unknown to the wider European public (this is not to imply that a detailed media coverage is easily achievable- quite contrary!).

The CoFoE is a success story

Notwithstanding these shortcomings, it would be wrong not to characterize the CoFoE as a success story. The CoFoE is not only the EU’s first effort regarding the institutional reform in years, but also a very innovative way to initiate it. Hence, one should learn lessons and build on this experience in order to successfully institutionalize democratic innovations from which European democracy would greatly profit.