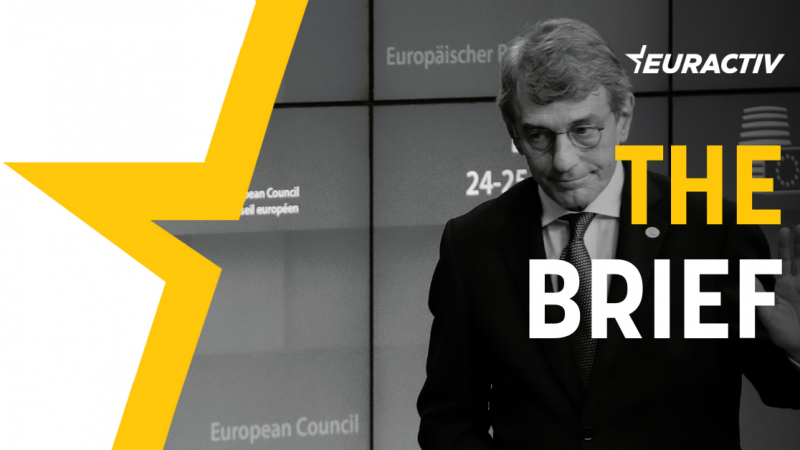 Europeans are in a state of shock today, mourning the death of David Maria Sassoli, ‘the good president’.

A picture circulated on social media this morning shows a thirty-two-year-old Sassoli with a hammer and a pickaxe trying to knock down a small portion of the Berlin wall.

European Commission President Ursula von der Leyen wanted to remind everyone how David Sassoli was among those young Europeans who came to Berlin in 1989 when the Wall came down.

Speaking of that event, Sassoli said in 2019 that he remembered well “the irrepressible happiness, the hugs, the tears,” but also the “deep-seated awareness in all of us that we were living in a unique and unrepeatable moment in history”.

It is not surprising knowing that a true European and fervent federalist – as recalled by EURACTIV.it editor Roberto Castaldi in his opinion piece – was among those who bore witness to such an historic moment that helped to build a good thing by symbolically destroying a bad one.

This picture may seem so distant from the amicable and peaceful figure of Sassoli, the Parliament president, but ask anyone who has been in contact with him, and they will probably say they were impressed by his kind manners. He was often described as a gentleman – in terms of goodness and generosity toward others.

This morning, many people conveyed their condolences, most of them not just words of courtesy and circumstance.

This grief is genuine, as it has been noted: before being a politician, good or bad, he was first and foremost regarded as a decent man.

His kindness and purity of spirit were a product of his good nature. In this sense, he is reminiscent of Pope John XXIII, who has also been affectionately referred to as ‘il Papa Buono’, the Good Pope.

Recently, he had become particularly concerned about new walls that have been built in Europe.

“In some cases, our borders have become lines between right and wrong, between human and inhumane. These walls block people who are seeking shelter from the cold, from hunger, war and poverty,” he said in his last message wishing a merry Christmas to all EU citizens.

And he actually moved from words to deeds, as he decided to open the doors of the European Parliament building to house 100 homeless women who had been victims of domestic abuse and were affected by COVID restrictions in 2020.

“Christmas is the time when hope is born, and we can be that hope when we don’t ignore those in need. When we don’t build walls on our borders, when we fight all forms of injustice,” he said in his last message.

But one thing that truly stands out in his career as a journalist and a politician is some immunity to the temptations of power, as, throughout his life, he reached top posts in both fields.

In Italy, he was not just a journalist: he was the anchor of the evening newscast for the national broadcaster, the familiar face that many people – including me – had dinner with every night.

Still, he remained humble and friendly, with no trace of arrogance even when he became president of a top EU institution.

This lack of pomposity contributed to a likeable personality, while his indifference to power made him a truly free man – a rare quality these days.

“Our challenge is to build a new world that respects people and nature and believes in a new economy based not just on profits for a few but on well-being for all,” he said in his last message – one of the most progressive things a politician can say.

He would have finished his term next week and would have lived a life as president Emeritus, sharing his passion, his joie de vivre, and goodness with everyone.

All of this, and the man himself, will be sorely missed.

After nearly eight hours of negotiations in Geneva on Monday (10 January), talks between US and Russian officials over European security offered no sign of a major breakthrough. The talks were the first in a series of meetings expected this week, scheduled amid fears of a Russian invasion of Ukraine and wide-ranging concessions asked by Moscow from Washington and its NATO allies over Europe’s security future architecture.

With David Sassoli, we have lost a great president of the European Parliament and a personality who is part of the Italian pro-European tradition, writes Roberto Castaldi.

The euro has existed for over 20 years but many EU member states still have not signed up, with hesitance for political and economic reasons cited as the main stumbling block. While all EU member states except Denmark are, in theory, obliged to adopt the euro, Sweden, Poland, the Czech Republic, Romania, Hungary, Bulgaria, and Croatia do not yet use it.

EU lawmakers held their first political discussion on the proposed Digital Markets Act, a key piece of the EU’s digital legislation, on Tuesday, with a view to reaching an agreement by the end of March.

The European Commission said on Monday (10 January) it has delayed to later this month the deadline for experts to give feedback on divisive plans to allow some natural gas and nuclear energy projects to be labelled as sustainable investments.

The EU lawmaker in charge of negotiating Europe’s upcoming levy for carbon-intensive imports has recommended drastic changes, including a quicker rollout and adding more products to the scope of the draft legislation.

The European Union’s proposed package of energy and climate laws received surprise backing from the leader of Baden-Württemberg, an influential German state which is renowned worldwide for its cutting-edge automotive industry.

US natural gas stocks returned to normal by the end of last year as a result of an exceptionally mild start to the heating season and high prices, which encouraged coal-fired power generation rather than gas burning.

Last but not least, don’t miss our weekly Transport Brief

Views are the author’s.