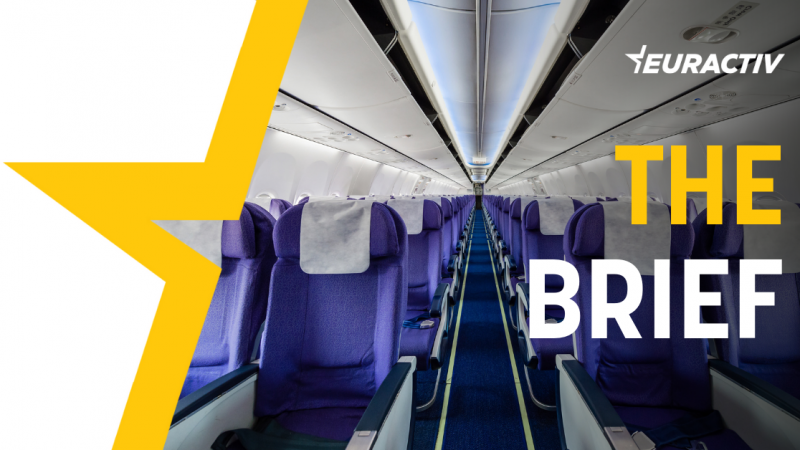 “Kafkaesque” may be an overused term, but there are rare occasions when it is fitting. This Brief is about one of them.

The “ghost flights” phenomenon, in which empty planes jet between EU airports in a climate crisis for no good reason, seems the right time to evoke Kafka’s tales of the   grotesque, bizarre, and illogical.

Brussels Airlines, for example, has said it expects to fly around 3,000 empty or near-empty flights this winter season, while Lufthansa has warned of about 18,000 unnecessary flights.

While I do not doubt that each decision that led to this situation has a perfectly sane underpinning, the overall result is a bizarre distortion of the EU’s climate pledge.

The reason for these passenger-less jets traversing our skies stems from the requirement to fly a set percentage of flights to maintain take-off and landing slots at airports.

These slots are hugely valuable to airlines, who will go to great lengths to keep them – the cost of burning kerosene pales in comparison to the cost of losing a legacy airport position in Frankfurt, Paris, or Milan.

Before the pandemic, the EU required airlines to operate 80% of flights. But when COVID hit and passenger numbers dried to a trickle, the European Commission revised the figure to 50% – a compromise struck between maintaining competition and reflecting the reality of pandemic travel demand.

The compromise figure no longer reflected reality – those who braved the COVID variant and took their holiday flight were greeted in many cases with something approximating a private jet with airline livery.

The bizarre situation earned a sarcastic rebuke from Greta Thunberg, while several MEPs expressed their alarm at the unfolding situation.

MEP Brando Benifei of the S&D Group branded ghost flights “an insult that frustrates the efforts of millions of people and young people who fight every day to protect our planet and against climate change”.

Despite the pressure, the Commission has so far declined to change the rules.

Of course, the EU is in a difficult position. When consumers book a flight, they should expect that the flight will depart. Budget airlines also tend to cry foul when slot requirements are waived, hoping that the legacy carriers will falter and leave them to snap up the open real estate.

But these concerns should be secondary to preventing a situation that appears, particularly to those outside the Brussels bubble, as EU bureaucracy gone mad.

Brexiteers point to Europe’s ghost flight situation as an example of the absurd rules that, in their view, characterise the EU. The UK, by contrast, has suspended its slot rules for the winter season, removing the need for pointless plane journeys.

This is now the second time in the COVID crisis that slot rules have led to airlines flying empty flights.

The first may be chalked up to the unprecedented nature of the pandemic. The second has no such excuse – it is proof that the rules are not up to snuff.

Let’s hope there is no third time. Kafkaesque may not be a strong enough word to describe it.

There are ‘significant differences’ between Russia and NATO over Ukraine that will be difficult to bridge, NATO chief Jens Stoltenberg said after roughly five hours of talks on Wednesday, where Moscow repeated its demands for European security guarantees.

A trusted source in Almaty, Kazakhstan, gave a rare first-hand account to EURACTIV of the unrest that shook up the Central Asian country in the first days of 2022.

In Bulgaria, anti-vaxxers rallied by the pro-Russian party ‘Vazrazhdane” tried to storm the parliament building on Wednesday on the same day the country peaked with the highest-ever confirmed number of COVID-19 infections. Some 500 protesters, brought from around the country with buses and waving the flag of the extremist party, attempted to enter parliament at 12:15 pm local time but were pushed back by police.

Meanwhile, British Prime Minister Boris Johnson offered his “heartfelt apologies” on Wednesday for attending a “bring your own booze” gathering at his official residence during the country’s first coronavirus lockdown as opponents said he must resign.

European lawmakers expressed concerns over a change of course in the EU’s geographical indications (GIs) policy, drifting away from current rules and particularly European Commission supervision. Although originally envisaged for the end of 2021, a revision of the GIS policy is planned to be published in the first quarter of 2022.

EU agriculture chief Janusz Wojciechowski has promised to do his best to place carbon farming front and centre of member states’ Common agriculture policy (CAP) strategic plans amid concerns that nice words will not translate into action. “We need to work together to increase this direction of development of European agriculture,” he said.

Views are the author’s.