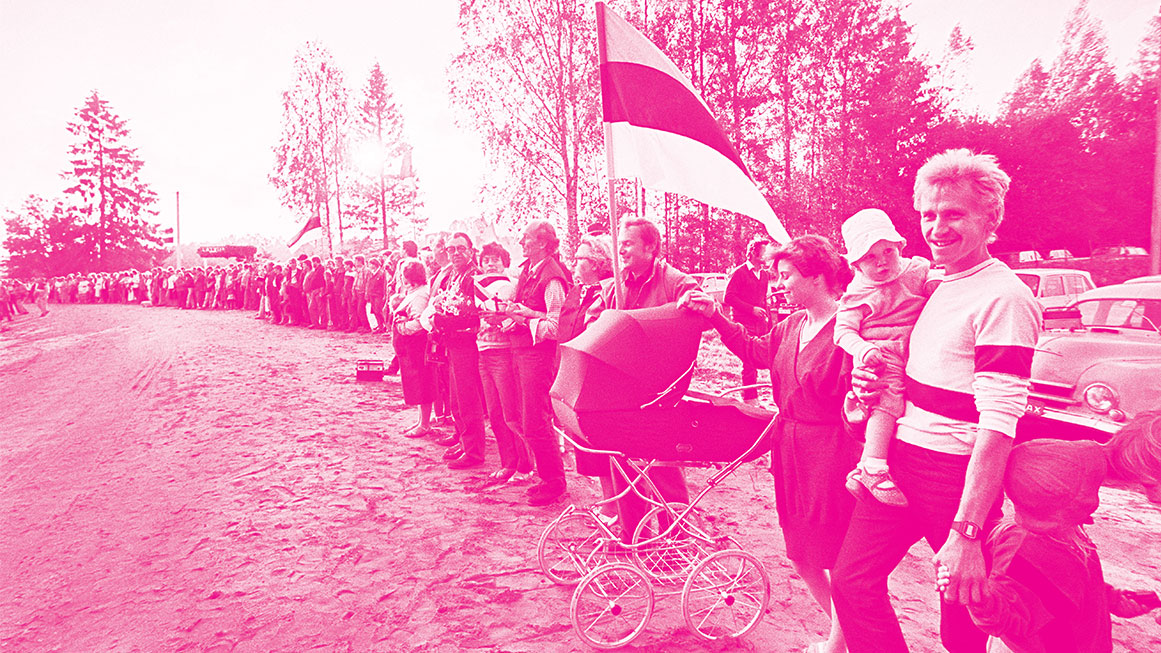 Reason‘s December special issue marks the 30th anniversary of the collapse of the Soviet Union. This story is part of our exploration of the global legacy of that evil empire, and our effort to be certain that the dire consequences of communism are not forgotten.

The Soviet story of Estonia, Latvia, and Lithuania begins in August 1939. German Foreign Minister Joachim von Ribbentrop and Soviet Foreign Minister Vyacheslav Molotov came together to sign the Molotov-Ribbentrop Pact, which granted their respective countries partitioning and annexation power over several Eastern European nations. Nazi Germany split Poland with the Soviets, and the Baltic states went to the USSR.

Decades of brutal Soviet rule would follow. On the 50th anniversary of the pact’s signing, the nationalist movements of Estonia, Latvia, and Lithuania decided to issue a collective call for independence. They organized the Baltic Way—a continuous human chain comprised of 2 million people, spanning 675 kilometers, traversing the three nations in a display of solidarity and peaceful resistance.

That unity continued as the Soviet Union fell. Where one Baltic state went, the other two soon followed. Lithuania became the first former Soviet republic to declare independence on March 11, 1990; Latvia and Estonia did the same just two months later. As Estonia pioneered radical economic reforms in its early post-Soviet days, Lithuania and Latvia would often adopt them with minor adjustments. Rejection of the Soviet Union and its lingering shadow came quickly, decisively, and uniformly in the Baltic states.

From the very beginning of the Soviet Union’s dissolution, the Baltics were a bloc apart. Their unwavering pursuit of national sovereignty and thorough rejection of the Soviet way of doing business have driven their unrivaled success.

In 1993, the Estonian foreign ministry argued in an internal memo that “the most important lesson is simple: time is short and time will not wait for small nations.” Though small, the Baltic states did not shrink from big actions. The three countries spent the ’90s completely overhauling their economic systems to recover from Soviet life. They focused on deregulation of trade and prices. Estonia, having done away with all foreign tariffs, was at that point the only truly free trading European country.

Macroeconomic stabilization came in 1992, with the three nations establishing their own currencies that summer. A “ruble zone,” using the Soviet currency, persisted in many of the independent republics after 1991—but the Baltic states decisively rejected such ties. Tax reforms were drastic. All three countries implemented flat income tax systems in 1994 and 1995, the first modern nations to do so. According to Anders Åslund, a Swedish economist who researches transition economies, Estonia, Latvia, and Lithuania “have been firm fiscal conservatives, regardless of political party in power, carrying out radical expenditure cuts aimed at a balanced budget.”

More than any other former Soviet republics, the Baltic states were reluctant to engage politically with the Russo-sphere after 1991. A number of former Soviet republics came together to form the Commonwealth of Independent States in 1991 with the aim of multilateral cooperation on trade and diplomacy. Though some member nations have come and gone, Estonia, Latvia, and Lithuania have never joined. They’ve instead pursued a pro-European path.

After nearly a decade of interaction under a European Association Agreement, the Baltic states joined the European Union in 2004. They joined NATO that same year, an explicit rejection of Russian influence. “In 1997, when Russian President Boris Yeltsin dangled unilateral Russian security guarantees in exchange for giving up on the Baltics’ NATO hopes, the offer was promptly rejected,” writes Andris Banka at War on the Rocks. They are the only former Soviet states with successful E.U. and NATO membership bids.

Reform of domestic institutions worked in tandem with these outward-facing goals. Estonia took a radical approach to the public sector and fired all government employees, giving it what Åslund calls “the best governance of all post-communist countries.” All three scrubbed their security apparatuses of Soviet influence and rooted out corruption. A robust free market of print and broadcast outlets emerged, attracting significant investment from Scandinavian media corporations, which hold major stakes in Baltic media to this day.

Political rights and civil liberties remain rock-solid in Estonia, Latvia, and Lithuania thanks to early reform efforts. Freedom House, which grades countries on their political rights and civil liberties, gives Estonia a score of 94 out of 100 points—tying it for 18th in the world and ahead of many other Western nations. Latvia and Lithuania are not far behind, with 89 and 90 points, respectively. Every election in Estonia, Latvia, and Lithuania since 1991 has been considered free and fair by outside observers. No other former Soviet republic has managed to accomplish that.

The decisive pivot from the Soviet way of life, though not without its sticking points, has kept the Baltic states prosperous to this day. Part of that success has stemmed from the vibrant innovation that takes place in the region. During the Soviet era, the Baltic economies centered on timber, dairy products, and agriculture. They’ve traded those in for software, electronics, and information technology products.

Estonia launched its e-Residency program in 2014, allowing non-Estonians to access Estonian services and start businesses in the country from outside its borders. As of 2018, the World Bank ranks all three countries in the global top 20 for ease of doing business. Estonia is the richest of the former Soviet republics, with Latvia and Lithuania taking second and third place.

Still, it hasn’t always been rosy. All three Baltic states struggle with emigration, a side effect of the increased movement brought on by E.U. membership. Between 1990 and 2017, Latvia lost 27 percent of its population, and Lithuania lost 23 percent. Estonia experienced a more modest decline—from a population of more than 1.5 million in 1991 to a current tally of around 1.3 million—but demographers still worry about the nation’s long-term prospects for growth. An estimated 20 percent of Latvians live abroad, according to the Migration Policy Institute, and Lithuania and Estonia estimate that “17 percent and 15 percent of their nationals, respectively, live outside their country of birth.”

The 2009 financial crisis provided one of the biggest tests for the Baltic economies, hitting them much harder than other parts of the E.U. The Baltic states have large export sectors tied to Western European supply chains; when demand cratered during the recession, they felt the heat. Estonia’s gross domestic product fell by 13.1 percent between the third quarter of 2008 and the first quarter of 2009. Latvia and Lithuania saw declines of similar magnitude. With their unemployment rates rising, many citizens of those countries left for greener pastures.

Austerity measures helped, however, and the International Monetary Fund anticipates that they’ll see some of the highest growth among E.U. nations following the economic shock of COVID-19.

The Baltic states have proved resilient and plucky in the face of many storms. Most of their fellow post-Soviet republics have not been so lucky, seeing despots take control, civil liberties become corrupted, and economies falter. But independence, internationalism, and innovation have defined these three nations since 1991 and kept them afloat. Estonians, Latvians, and Lithuanians may not be physically connected the way they were on that day in August 1989 when they marked five decades under the Molotov-Ribbentrop Pact. But the Baltic Way lives on.