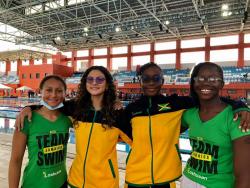 YOUNG SWIMMING sensation Christanya Shirley was the highlight of Jamaica’s performers at the Pan American Age Group Swimming Championships, held in Trinidad and Tobago from May 2-5.

Competing in the 13-14 age group, Shirley won six of Jamaica’s 18 medals, including two gold, three silver and a bronze.

Jamaica ended the championship with five gold, seven silver and six bronze and team manager Shauna Jackson said the youngsters did exceptionally well against top-level competition and that Shirley stood out.

“Christanya Shirley, who won gold in the 50m breaststroke and the 4x50m medley, distinguished herself at the championships, earning a high-point trophy in the 13-14 girls’ category.”

“The competition level was of a very high standard and this is why it is important to recognise the achievements of our swimmers.

“The overall display was more than satisfying. It is difficult to describe the pride you feel when preparation and training result in victory,” she commented.

Apart from her two gold medals, Shirley won silver in the 100 and 50-metre freestyle, as well as the 50m butterfly, and bronze in the 100m breaststroke.

Wainwright grabbed silver in the girls’ 15-17 50-metre backstroke and 4x50m mixed relays, as well as bronze in the 50m butterfly and 100m backstroke.

Levy Powell and Chin were first and third, respectively, in the 100-metre backstroke, while in the 50-metre event, Chin took the gold and Levy-Powell the silver. The pair also won a gold and a bronze in the relays.

Kibaki Thomas was the most outstanding male performer, winning silver in the 13-14 100m breaststroke and bronze in the 50m equivalent.

Zachary Jackson-Blaine was the other male individual medallist, taking bronze in the 50m boys 15-17 freestyle.

The 13-14 girls’ relay team of Chin, Shirley, Levy-Powell and Zaviya Cameron won gold in the 4x50m medley and bronze in the 4×50 freestyle.

Jackson added that the presence of Alia Atkinson also served as huge motivation for the youngsters.

“Alia spent time engaging and encouraging the team,” she disclosed.

Aquatic Sports Association of Jamaica (ASAJ) president, Martin Lyn, said the organisation was pleased to see the hard work and sacrifice during the pandemic bearing fruit.

“From a performance point of view, we are very pleased with what our athletes have done, considering the competition is of a higher level.

“During the pandemic we ensured the pool stayed open, so we were always keeping up with training and it is pleasing to see the effort that we have put in has paid off.

“The younger ones have proven they are capable of developing much further. We are looking at the Olympics in two years’ time and we are on the right track to send, hopefully, a big team to the Olympics, a male and female relay team.

“So it was really satisfying and we look forward to their continued development to represent at the Olympics later on,” he said.