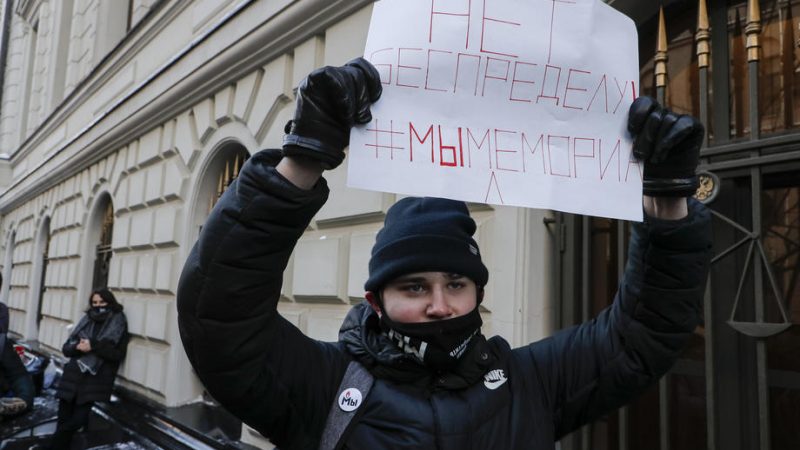 The ruling against Memorial International, the group’s central structure, caps a year that began with the jailing of President Vladimir Putin’s top critic Alexei Navalny and saw a historic crackdown on rights groups and independent media.

But the ban against Memorial stands out even in the current climate and would have been unimaginable just a few years ago.

Last November, Memorial said it was notified by Russia’s supreme court that prosecutors had filed a demand to dissolve the group over systematic violations of “foreign agent” legislation.

On Tuesday judge Alla Nazarova ordered the closure of Memorial International and its regional branches after prosecutors accused the organisation of failing to mark its publications with a “foreign agent” label, the tag for groups receiving overseas funds.

“Disgrace! Disgrace!” supporters shouted in court after the ruling.

Prosecutors also accused Memorial International of denigrating the memory of the Soviet Union and its victories and rehabilitating “Nazi criminals”.

During Tuesday’s hearing, a prosecutor said Memorial “creates a false image of the USSR as a terrorist state and denigrates the memory of World War II”.

The decision is the hardest blow yet to the organisation founded in 1989 by Soviet dissidents, including Nobel Peace Prize laureate Andrei Sakharov.

The ruling came after Putin accused the group of advocating for “terrorist and extremist organisations”.

In a statement on Tuesday evening, Memorial International said it would appeal and find “legal ways” to continue its work.

“Memorial is not an organisation, it is not even a social movement,” the statement said. “Memorial is the need of the citizens of Russia to know the truth about its tragic past, about the fate of many millions of people.”

“The persecution of International Memorial and Memorial Human Rights Center is an affront to their noble missions and to the cause of human rights everywhere,” US Secretary of State Antony Blinken said in a statement.

“The people of Russia — and the memory of the millions who suffered from Soviet-era repression — deserve better.”

We condemn today’s decision to forcibly close International Memorial, one of Russia’s most respected human rights organizations. Russian authorities should end their repression of human rights defenders and other independent voices.

French Foreign Minister Jean-Yves Le Drian said Memorial International’s dissolution was a “terrible loss” for Russia, adding the decision was “deeply worrying” for the future of historical research and the defence of human rights.

Germany called the court’s decision “more than incomprehensible” and said it went against international obligations to protect fundamental civil rights.

Marija Pejcinovic Buric, secretary general of the Council of Europe, said the “devastating news” meant Russia appeared to be moving “further away from our common European standards and values”.

Dozens of supporters gathered outside the courthouse in freezing temperatures and several people were detained.

Memorial is a loose structure of locally registered organisations, with Memorial International maintaining the network’s extensive archives in Moscow and coordinating its work.

The group has spent years cataloguing atrocities committed in the Soviet Union, especially in the notorious network of prison camps, the Gulag.

Supporters say its closure signals the end of an era in Russia’s post-Soviet democratisation process, which began 30 years ago this month.

Author Leonid Bakhnov, whose grandfather was executed at the peak of Stalin-era purges in 1937, said the group’s closure was “a tragedy for Russia”.

“What a wonderful New Year they arranged for us,” he said bitterly.

Memorial’s founders have denied any serious violations, saying only an insignificant number of documents may have been missing the “foreign agent” tag.

Tuesday’s hearing was one of two cases brought against the group. Prosecutors have also demanded a court close Memorial’s Human Rights Centre, accusing it of condoning “terrorism and extremism” in addition to breaching the “foreign agent” legislation.

On Wednesday, a Moscow court will hold a new hearing in that case.

Memorial’s Human Rights Centre has campaigned for the rights of political prisoners, migrants and other marginalised groups and highlighted abuses, especially in the turbulent North Caucasus region that includes Chechnya.

Political analyst Anton Orekh said the closure of Memorial was akin to the “public justification of Stalin purges”.

“The consequences for the present and the future of our country will be catastrophic,” he added.

Auschwitz Memorial said on Twitter: “A power that is afraid of memory will never be able to achieve democratic maturity.”

On Monday, a court in the northwestern city of Petrozavodsk increased by two years a 13-year prison sentence for the head of Memorial in Karelia, Yury Dmitriyev, in a sex abuse case his supporters call punishment for his work.