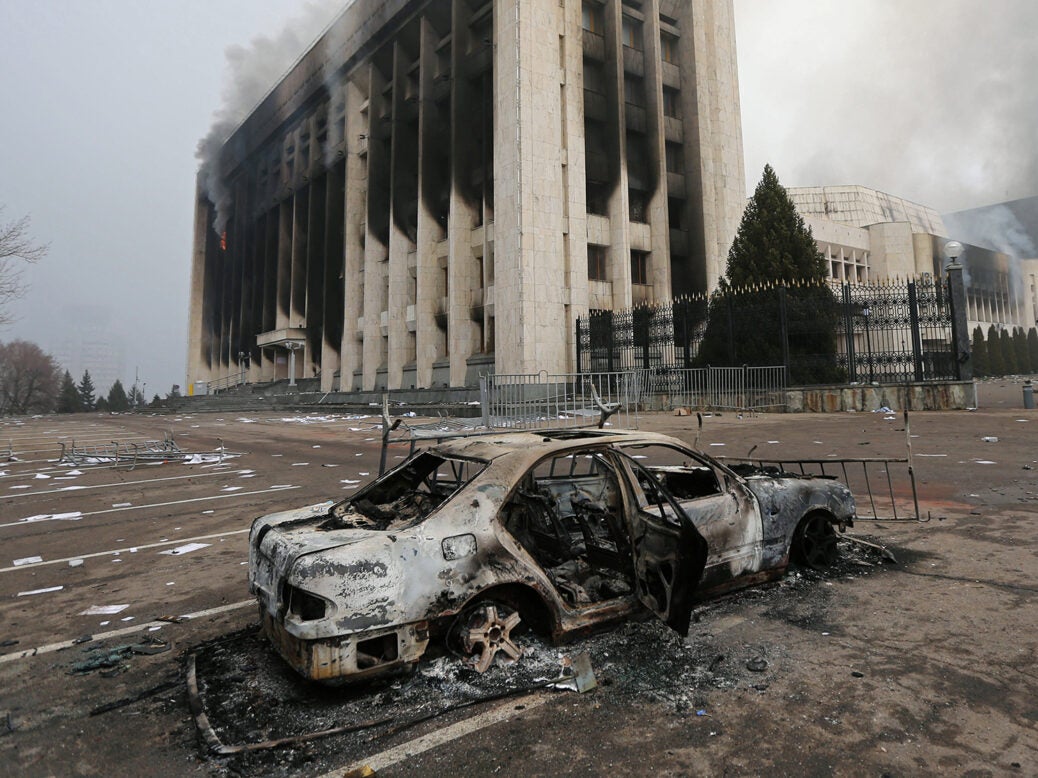 BERLIN — After days of mounting unrest in Kazakhstan, troops from the Russia-led Collective Security Treaty Organisation (CSTO) have begun to arrive in the authoritarian Central Asian country at the request of its president, Kassym-Jomart Tokayev.

Widespread protests erupted across Kazakhstan this week. Initially triggered by rises in the price of fuel in the oil-rich west of the country, the protests quickly morphed into nationwide demonstrations against the government. Protestors seized government buildings in Almaty, Kazakhstan’s largest city. Dozens of protestors were killed in the night and early morning of 5 and 6 January, according to a police spokesperson.

Much popular anger focused on the role played by the former president Nursultan Nazarbayev. The country’s first post-communist leader formally resigned in 2019 after nearly three decades in office, but was widely viewed as maintaining extensive power over affairs of state in his position as chairman of the country’s Security Council. Tokayev removed Nazarbayev from the position earlier this week. The Nazarbayev family has been linked to an offshore property empire worth hundreds of millions of dollars while GDP per capita in Kazakhstan remains below $10,000.

The CSTO deployment is the first time the organisation’s collective security provisions have been used in its almost 30-year history. The organisation has refused requests to trigger Article 4 on at least two previous occasions: in 2010, during ethnic unrest in Kyrgyzstan, and in 2021, when Armenia accused Azerbaijan of carrying out attacks on its territory following its victory in the Second Nagorno-Karabakh War the year before.

Nikol Pashinyan, the prime minister of Armenia and the current chair of the CSTO’s Collective Security Council, announced on 5 January that troops from the alliance would be sent to Kazakhstan under the provisions of Article 4 of the CSTO treaty on collective security. This section of the pact, which mirrors an equivalent provision of the Nato charter, states that: “If one of the Member States undergoes aggression (armed attack menacing to safety, stability, territorial integrity and sovereignty), it will be considered… as aggression to all the Member States,” and will be grounds for military assistance.

In a televised address to the nation on 5 January, Tokayev claimed that protestors were foreign-trained “terrorists” who were seizing infrastructure, aircraft and weapons. The president characterising those opposing his rule as having received training abroad may have been necessary to receive CSTO assistance, as the text of its charter does not contain references to helping member states quell domestic unrest.

“Formally, CSTO troops cannot be used to protect dictators from the justified anger of their citizens. Therefore, protestors were recognised as terrorists,” wrote allies of Alexei Navalny, the jailed Russian opposition leader.

The Russia-led military alliance was formed shortly after the dissolution of the Soviet Union. The grouping is made up of six post-Soviet states: Russia, Belarus, Kazakhstan, Tajikistan, Armenia and Kyrgyzstan. Russia is by far its largest member and its troops will likely represent the bulk of the CSTO deployment to Kazakhstan. “Although Armenia currently chairs the organisation, we all know Russia leads it,” said James Nixey, the director of the Russia and Eurasia programme at the think tank Chatham House.

The CSTO organisation may complicate any plans Russia has for an invasion of Ukraine, on whose border it has been massing troops since around November last year. “It’s always harder to maintain two fronts,” Nixey said. “The Russians have got their hands full at the moment, and now they’re stretched very thin.”

The stakes for the Russia-led intervention, which will reportedly be focused around the protection of significant infrastructure such as the Baikonur Cosmodrome, are high. “Kazakhstan is another test, after Belarus, of Russia’s ability to help stabilise its formal allies without alienating their populations,” wrote Dmitri Trenin, the director of the Carnegie Moscow Center. The mission may well save a president nervous about his own future, but it comes with the longer-term political risk of Tokayev’s survival in office being perceived as a product of external help.

[See also: Ten crucial questions about the world in 2022]