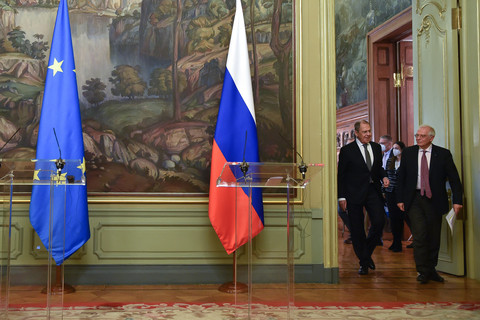 Russia and the US have scheduled security talks for 10 January, while Moscow continued to belittle the EU.

Russia was also due to hold talks with Nato on 12 January and with the Organisation for Security and Cooperation in Europe (OSCE) on 13 January.

Nato and the OSCE are made up primarily of EU member states.

But for his part, Russian foreign minister Sergey Lavrov said on Monday that the US would be Russia’s only real interlocutor.

The Nato talks would also be dominated by a Russia-US exchange, he indicated.

“These will be [with] key members of the bloc, primarily the United States,” he added.

“[Borrell] solemnly proclaimed a new approach [to Russia]: ‘push back, restrain, and involve’. Imagine the choreography of it all. Sorry, but this is political Kama Sutra,” Lavrov said.

The talks are to come after Russia threatened to attack Ukraine once again unless Nato promised to halt expansion and pull US troops out of eastern Europe.

The Nato promise was meant to keep out Sweden and Finland as well as Georgia and Ukraine.

Russia’s public demands were so outrageous that many Western commentators saw them as a pretext for going to war instead of genuine proposals.

And its desire to talk with the US or “key” Nato states, such as Germany and France, only was seen as an attempt to divide the EU while aggrandising itself on the world stage.

Meanwhile, Moscow continued to dial up tension as the countdown to the US talks began.

“Recently the alliance [Nato] has resorted to direct provocations that pose a high risk of escalating into an armed confrontation,” Russian deputy defence minister Alexander Fomin claimed in a meeting with military attachés from 14 Nato states in Moscow on Monday, according to German news agency DPA.

Its defence minister, Sergei Shoigu, again claimed that US mercenaries were in Ukraine and planning to stage false-flag attacks designed to provoke a war.

“The presence of over 120 members of US private military companies in Ukraine has been proved reliably”, Shoigu said, without giving any proof.

The sabre-rattling abroad has been accompanied by a tightening of freedoms for Russians at home.

A Russian court on Monday added two years to the sentence of Russian historian Yuri Dmitriev.

Dmitriev stands accused of sexually abusing his adopted daughter, but his supporters say he was being punished on false charges for documenting Stalin-era crimes in his former work for the NGO Memorial, which is also at risk of being shut down.