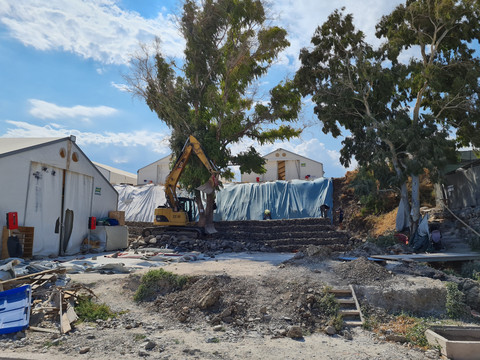 Thousands of recognised refugees and others in Greece are said to be going hungry, according to NGOs on the ground.

The issue has been brewing for months by a Greek government that appears to be using hunger as an asylum deterrence and as means to clear out camps on the mainland.

Melina Spathari, who works at the Terre des Hommes Hellas, said there are migrant kids collapsing from hunger in schools.

“There is a situation that is inhumane. Total, total total chaos,” she told EUobserver on Tuesday (21 December).

She said newborn babies in the camps are crying at night with hunger as mothers try to feed them using a mix of water and biscuits.

“They don’t have milk,” said Spathari.

Spathari said the Greek Ombudsman earlier this week described the Greek government policy as “unconstitutional” and that Athens must take immediate action to remedy the problem.

Some 28 NGOs, in a joint statement last week, said the Greek government policy enacted since October, has affected an estimated 60 percent of the 16,659 residents in mainland camps alone.

This comes after the government introduced a rule in March that effectively rendered refugees homeless, forcing many to return to the camps in order to receive the most basic of services.

Those camp-based services were scrapped in October for refugees, leaving them destitute and unable to feed themselves without outside help.

A lack of government integration projects has left others in an administrative nightmare, said Spathari, noting people cannot get jobs because they are required to have a permanent address and a bank account.

“These people cannot find accommodation outside the camps. They cannot find jobs because they don’t have access to a bank account, so they can’t enter the job market legally,” she said.

“It’s a vicious circle turning around and around,” she said.

The European Commission also chimed in earlier this month in a letter drafted by home affairs commissioner Ylva Johansson.

“The commission has repeatedly called upon the Greek authorities to ensure all persons, particularly the vulnerable receive basic means of subsistence, notably, food and hygiene products,” she said.

The letter was a reply to the Greek-based NGOs, with the Greek prime and migration minister in copy.

A commission spokesperson on Tuesday said the Greek authorities did not reply to the letter.

Instead, he said a new cash assistance and payment system was set to be launched this week to help asylum seekers.

But registered asylum seekers are not the problem, points out Spathari.

She said the issue of hunger is affecting other categories, including recognised refugees, unregistered asylum seekers, and nationalities the Greek government deems safe for their return to Turkey.

“All people that reside there [camps] are eligible regardless of their legal status, they are eligible for the provision of services,” she said.

Johansson, in her letter, made similar observations.

“We have underscored that all persons, irrespective of their status, should benefit from the provisions of EU law,” she wrote.