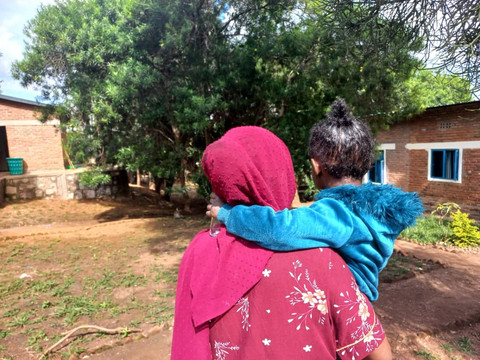 This is when all bad things happen. When your house is raided by militants, when you are physically or sexually assaulted, when your daughter’s very life is threatened.

In just over a decade, I have seen bombings, fires and experienced multiple displacements along the way from fleeing from home.

On the journey from my home in south Darfur, Sudan, to my refuge in Tripoli, Libya, I never chose where to stay. It was always violence and war driving me out, starting with my first of many displacements in 2009 when fighting and fires engulfed my village.

In Libya, I was smuggled in last year with my husband and our baby on the back of a truck transporting cattle. Just as we thought we were about to reach safety, we were caught and detained for not having proof of identity. We had lost our papers in the last fire that broke out back home and forced us to leave Sudan.

In detention, we spent 21 days. The guards would serve us a loaf of bread for breakfast and plain pasta for dinner. I was raped while my husband was being beaten up next to me. My daughter became so sick that she almost died from diarrhoea.

We found a way to escape, only to be stopped at a checkpoint on the way to Tripoli. The officials asked for money, which we didn’t have; so, they took my husband instead. I haven’t heard from him since.

Today, I just want to avoid men with evil intentions, homelessness or death.

Like when I thought I had finally found a job with a family in Tripoli, but quickly realised there was no family to begin with. It was a lie the man who offered me the job invented. He locked me in and threatened to keep my daughter in a sack until she suffocated, unless I conceded.

I think back at the time when I went to university. I wanted to become a lawyer. I still do.

I knew I stood no chance without education. I know everything I had built has been destroyed, but I never stopped dreaming. Even when I lost my brother and sister in the war, and when my legs were damaged beyond any treatment, I kept on learning.

It is that hope that one day you will have a second chance that keeps you going. This is how many of us, refugees with no place to call home, think. Whether on a boat at sea or in a forest tent, we dream of a safe, dignified future.

Refugees are mistreated because countries see them as a burden, particularly in transition countries like Libya. It is only a matter of time before you are thrown in detention, forced to do hard labour, eat rotten food, and experience physical and emotional abuse.

I can speak for what I have been through, and I know I am not alone. This is why, for refugees, Europe provides hope; hope of a better future and equal opportunities.

A refugee would never leave home if it wasn’t for violence and war. It is the most difficult decision one could make. When they lose family and that sense of safety, this is what pushes people out. This is what forces them to live the life I am living.

Many people take the step to risk their life by getting on the boat to find safety elsewhere. I haven’t considered it myself, but I can understand why people put themselves in harm’s way. We can be this desperate.

As long as we are refugees, as long as we can’t prove who we are, and as long as we have no place to belong to, we will be stripped of every right, fighting to survive the day.

If you are a country that can afford to take in a desperate person who lost home, my message is to not say no to saving lives. I urge those countries in Europe and beyond to open their arms to those who have been through the most miserable circumstances and had no choice.