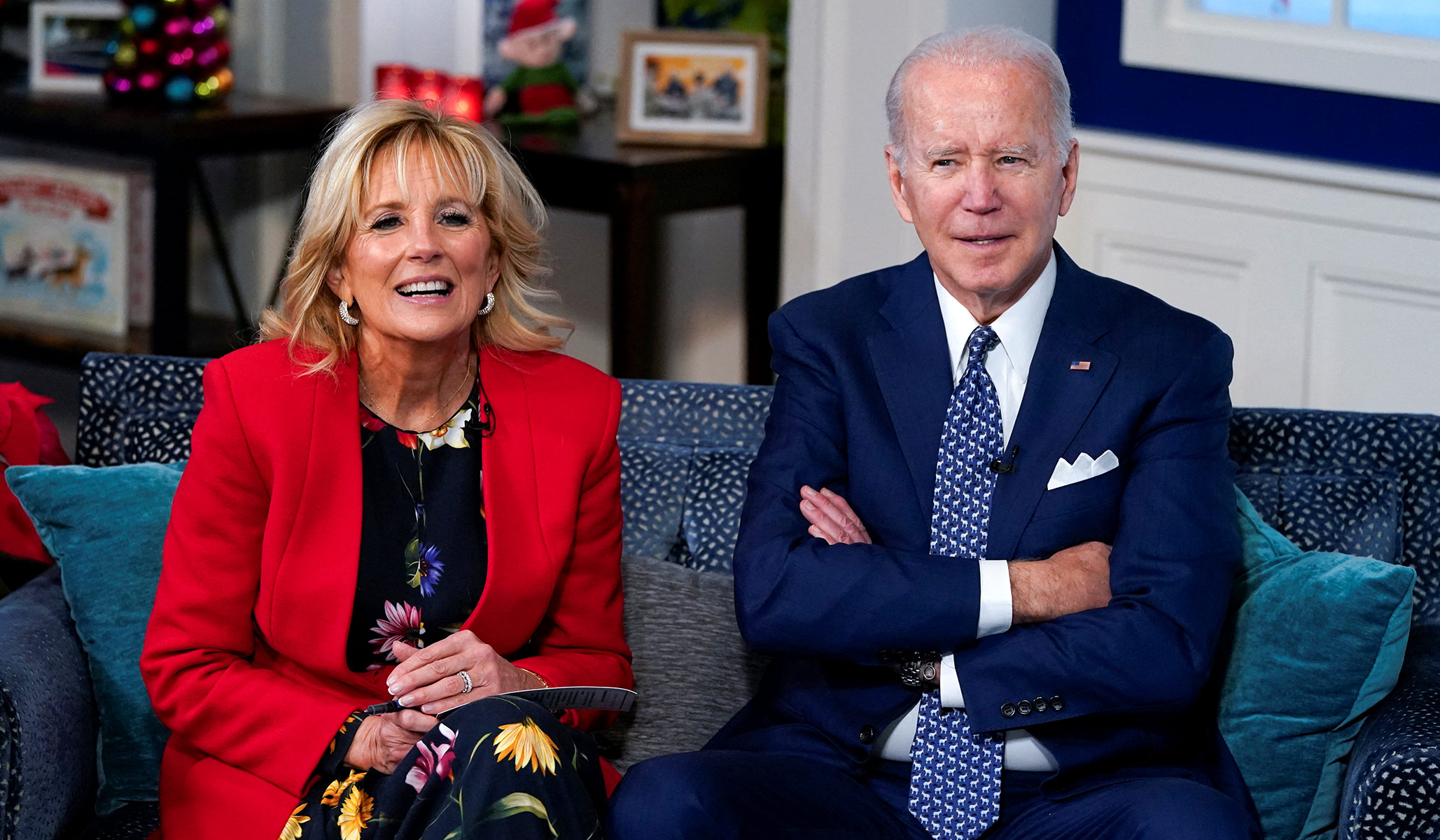 On manners and conservatism; Hong Kong and democracy; the late Desmond Tutu; Arnold Schwarzenegger and Americanism; and more

By now, you have heard about an exchange that President Biden had with a man on December 24. Sitting with the First Lady, Biden said to the man, “Well, I hope you have a wonderful Christmas.” The man responded with “Merry Christmas and let’s go, Brandon.”

And so on and so forth.

Trump’s eldest son, Donald Jr., has declared the man who said “Let’s go, Brandon” to Biden a “hero.” No doubt, millions of other people feel the same way.

There is something great about a country in which a citizen can say to the chief executive, “F*** you” (or the equivalent) — can say it without jailing or worse. At the same time, I remember an old lesson, once articulated by Bill Bennett, when he was arguing with Michael Kinsley on television: “Don’t confuse what you have a right to do with what’s right to do.”

Long ago, in a galaxy far away, good manners were thought to be a component of conservatism — along with limited government, free enterprise, personal responsibility, American leadership abroad, moral character in office, etc. The founder of National Review, William F. Buckley Jr., made a lot of good manners and exemplified them. He despised bad manners, whether they were committed in the name of politics or anything else.

That, as I’ve said, was a different era. Today, many on the right deride this kind of thing as “peacetime conservatism,” cuckery, sissiness, and all the rest of it. Crudity is in the saddle — crudity of thought, crudity of expression, crudity of action. But eras come and go. And maybe a better conservatism (a genuine conservatism, I would say) will reassert itself.

• I smiled at this headline: “COVID variant disrupts holiday travel but not shopping.” (Article here.) You can’t keep the American consumer down. May it ever be thus.

Another two Hong Kong universities removed public artwork Friday commemorating China’s 1989 crackdown on pro-democracy protesters in Beijing’s Tiananmen Square. The Goddess of Democracy statue was taken away before dawn from the Chinese University of Hong Kong.

Before dawn, huh? Could it be that the authorities were somehow . . . ashamed? Why not do it in broad daylight?

In 2014, I wrote about the Victims of Communism Memorial Foundation, in Washington, D.C. Allow me to quote a couple of paragraphs:

The most visible achievement of VOC so far has been the erection of a memorial near Capitol Hill. It is a replica of the “Goddess of Democracy,” fashioned by the students in Tiananmen Square. . . .

Money for the memorial in Washington came from various quarters, especially the Vietnamese, Baltic, and Hungarian communities in this country. While he was president, George W. Bush was asked to serve as honorary chairman of VOC — and he did. It was he who spoke at the dedication of the memorial, in June 2007.

In a monumental city, the Victims of Communism memorial is modest — small-scale — but stirring and apt. Its sculptor is Thomas Marsh, not just an artist but a believer: He waived his fee in sculpting this memorial. And let me say, in a gratuitous aside, that he is a longtime and warmly admiring subscriber to National Review.

• Did you catch this? The latest on our buddies the Saudis? “US intelligence agencies have assessed that Saudi Arabia is now actively manufacturing its own ballistic missiles with the help of China.” Swell.

There are many Americans who are hot against China but sweet on Saudi Arabia — or at least defensive of “the Kingdom.” What will they make of the latest?

• Desmond Tutu, the South African prelate, anti-apartheid leader, and Nobel peace laureate, has died at 90. In his lifetime, I wrote of him very critically — on the subjects of Israel and the United States, to name two. I sketched out Tutu, along with lots of other people, in my history of the Nobel Peace Prize (here).

Now, however, I would like to record some positive things, only. When I looked into his life, I found a lot to like and admire. Anyone would.

He could be very candid — disarmingly so. “No sooner had I got the Nobel Peace Prize,” he observed, “than I became an instant oracle. Virtually everything I had said before was now received with something like awe.”

Of the Nobel committee, and his prize, he would sometimes say, “They probably figured it was time to give it to a black.” Also: “They may have thought, ‘And, ah, he has an easy surname: Tutu.’ What if I had a surname like Waokaokao?”

Tutu was part of the nonviolent opposition to the apartheid regime when it was difficult — sometimes dangerous — to be so.

When he won the prize, Tutu said, “God is saying to us, He is in our side.” Tutu also said that the prize was not really for himself but for “the little people whose noses are rubbed in the dust every day.”

In his Nobel lecture, Tutu said, “Many times, in the same family, one child has been classified white whilst another, with a slightly darker hue, has been classified colored, with all the horrible consequences for the latter of being shut out from membership of a greatly privileged caste. There have, as a result, been several child suicides. This is too high a price to pay for racial purity.”

He led his nation’s Truth and Reconciliation Commission — on which a lot was riding — and he led it very ably.

He was good — very good — on China. (On human rights in China, I mean.) He was a strong supporter of the Dalai Lama and the Tibetan cause.

He was one of the few — very few — to criticize the dictator next door: Mugabe. In 2007, he said, “We Africans should hang our heads in shame. How can what is happening in Zimbabwe elicit hardly a word of concern, let alone condemnation, from us leaders of Africa?”

Desmond Tutu campaigned steadfastly against a rotten, discriminatory, anti-democratic regime ruling his country. There are worse ways — many — to spend one’s time.

• Did you see Mitt Romney’s Christmas card? Rather, his family photo and message? Go here. The constituency for Romney — or anyone like him — is tiny. Romney is reviled by Left and Right alike. His values are way, way out of style. But, you know? There is a constituency all the same. Maybe it will grow — like the Romney family itself! They alone make a helluva nucleus.

• Did you read about Arnold? “Arnold Schwarzenegger ‘celebrates Christmas early’ by visiting 25 military veterans he donated homes to.” And the article’s subheading: “Actor paid for 25 homes to be built in Los Angeles.”

Immigration is a complicated, multifaceted topic. But the contributions that immigrants have made to our country, in countless ways — undeniable, as I see it.

• You may know of Russell D. Moore — an Evangelical writer and leader. When Evangelical America made a great pivot in 2016 or so, he stayed put, which was not easy.

Along with Christmas, we are celebrating the thirtieth anniversary of the fall of the USSR. If not for that, we would not have our sons, adopted from a Russian orphanage in 2002.

Tomorrow one of them, Ben, swears in to the United States Air Force.

To see the tweet — complete with photo of father and son in front of the Rockefeller Center Christmas tree in New York — go here.

• I have a few photos for you my own bad self. Here is a handsome façade, in New York:

And here are some shots of a village, a hundred miles east of the city:

Merry post-Christmas, everyone, and happy pre-New Year. Catch you soon.

If you would like to receive Impromptus by e-mail — links to new columns — write to jnordlinger@nationalreview.com.