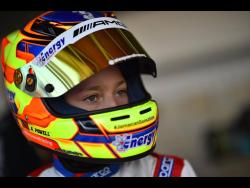 Coming off the back of his first FIA podium finish in March in Zuera, Spain, Powell, who is signed to F1 team Mercedes, overtook Nakamura-Berta, who started from pole position on the second lap of the final and never surrendered his advantage. This was after he finished second to Nakamura-Betra in the Super Heat A earlier in the day before the final.

While Powell said that they were always working towards a favourable result given their performances from the weekend, the magnitude of the moment was difficult to express, having made a massive milestone in his racing journey.

“We had good preparation coming up to this race, and we were always hoping for the best result. But I can’t explain how it is to win my first European FIA event. It is a feeling that I can’t put into words,” Powell said after the race. “I’m so happy and grateful for all my supporters, my team, and my family. Everyone has put their work into this. I can’t put it into words.”

The result was a combination of a strong weekend from qualifying to the heats to the final, where he made his move to the lead despite a difficult start to the race

“The weekend started very well on my part. It was just to stay consistently there throughout the heats and the superheat. I knew the final was going to be such a difficult race. The start was very difficult. I was able to get into second place. I made a move for first – it was quite last minute. I was able to get through, and then from there on, it was just managing my tires and manage the rest of the race,” Powell said.

It is an achievement that drew praise from Prime Minister Andrew Holness, who congratulated Powell on social media on Sunday.

“Alex continues to make a name for himself and for Jamaica in a sport that is usually dominated by drivers from Scandinavian countries. We are so proud of you, Alex!” Holness said on Twitter.

Powell’s maiden FIA win also puts him in the thick of the championship race as he is now in third place with 53 points, 17 points away from second-place Nakamura-Betra, who is on 70 with one round to go. Joe Turney of Great Britain is still the championship leader with 79 points, and despite the 20-point gap, Powell believes that he can have a say in the matter in the final race of the series, next month in Italy.

“We are getting towards the end of the European championship, and that is the time where championships can be decided, and for me, (the win) is a huge confidence booster,” Powell said.