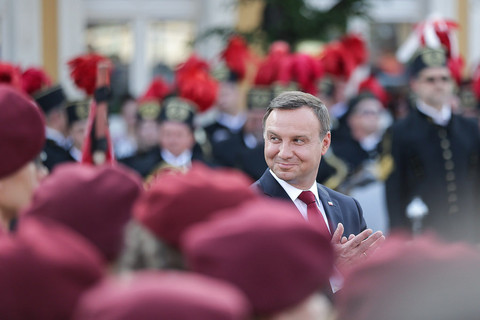 Poland’s president, on Monday (27 December), vetoed a media bill that critics said was aimed at silencing a US-owned news channel that was critical of the government.

President Andrzej Duda’s move came amid worries that the law would put relations with Washington under pressure at a time when Russia’s threat of a new war against Ukraine had increased tensions across central and eastern Europe.

The TVN24 news channel, the country’s biggest independent network, is owned by US company Discovery.

Washington has been critical of the bill presented by its Nato-ally. The US had urged Duda to use his veto.

The bill was voted through parliament earlier this month by the ruling nationalist Law and Justice (PiS) party, Duda’s political partners, sparking criticism and street protests.

“Thank you, Mr. President Andrzej Duda for your leadership and commitment to common democratic values and for protecting the investment climate in Poland. Together, the allies are stronger!”, the US chargé d’affaires in Warsaw, Bix Aliu, tweeted.

Duda said in a statement on Monday that if the law came into force it could violate a treaty signed with the US on economic and trade relations.

“One of the arguments considered during the analyses of this law was the issue of an international agreement that was concluded in 1990, this treaty speaks about the protection of investments,” he said according to Reuters.

“Most of my compatriots, most of my fellow citizens, do not want any more disputes,” Duda said, according to state-run news agency PAP.

Parliament could vote to overturn the president’s veto, but PiS does not have the required three-fifths majority of votes to do this.

The bill not only risked straining relations between Washington and Warsaw, but also heightened persisting concerns over media freedom in Poland.

The proposed new rules would have forced Discovery out by insisting that broadcasters operating in Poland must be majority-owned by companies based in the European Economic Area.

It would have given Discovery six months to sell its shares in TVN24.

PiS has argued that foreign media groups have too much power in Poland.

Duda said that he generally believed limiting foreign ownership of media was sensible, but that any regulation should concern future investments, not current owners.

Poland has also been at loggerheads with the EU in recent years over judicial independence, rule-of-law, and media freedom.

“Good news from Poland. I welcome the announcement by President Duda that he vetoes Lex TVN. This is an important signal for dialogue,” she tweeted.

“The president has exercised his constitutional prerogative and he will have to answer for it in front of God, history, and the Polish nation”, Janusz Kowalski, an MP from United Poland, a far-right party in the ruling coalition, also said.

Polish news agency Onet.pl cited an anonymous “senior” PiS politician as saying “it’s hard to describe Duda’s actions as anything other than … betrayal”.

Duda had not consulted the country’s de facto leader, deputy prime minister and PiS chairman Jarosław Kaczyński, who is seen as running the government from behind the scenes, according to media reports.

Reporters without Borders (RSF), a media rights watchdog, said the veto was “good news for press freedom, which is in dire straits in Poland”.

Since PiS was elected to power in 2015, Poland has dropped 46 places in the RSF’s World Press Freedom Index to reach 64th place.