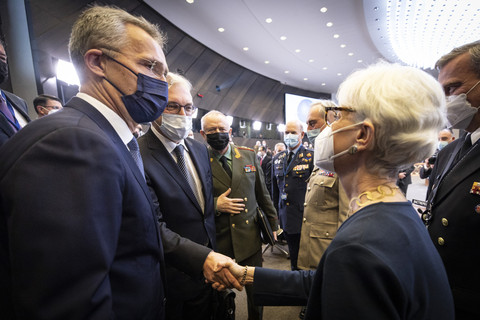 Nato and Russia are in talks to reopen their embassies in Brussels and Moscow amid Western efforts to dial down tension on Ukraine.

Nato has also offered to hold a series of meetings to discuss new rules on military drills and missile deployments in Europe.

But Russia’s intentions remained unclear and its troop build-up on Ukraine’s borders continued on Wednesday (12 January).

“We have made it clear … that we [would like to] actually reopen, re-establish, both the Nato office in Moscow and also the Russia mission to Nato because we believe in dialogue,” Nato secretary general Jens Stoltenberg said after a meeting of the Nato-Russia Council in Brussels, the first such event in over two years.

“At the same time, both Russia and Nato allies expressed the need to resume dialogue and to explore a schedule of future meetings,” even if the embassies remained defunct, he added.

It also asked Nato to forbid future membership to Ukraine and Georgia and to pull allied troops out of the Baltic States and Poland.

These “core principles of European security” were not up for discussion, Stoltenberg said.

But future meetings could discuss “transparency of military exercises” and “reciprocal limitations on missiles”, including medium-range nuclear missiles in Europe, he noted.

“Russia was not in a position to agree on that proposal. They didn’t rejected it either. But the Russian representatives made it clear that they needed some time to come back to Nato with an answer,” Stoltenberg said.

The Russian delegation was headed by deputy foreign minister Alexander Grushko, its former ambassador to Nato.

He said little to press on Wednesday.

“We are deeply convinced that this [a new treaty on missile deployments] would meet the interests of all countries,” he told Russian news agency Tass.

But Grushko spoke in friendly tones inside the four-hour long meeting, a Nato source said. He also shook hands with US deputy secretary of state Wendy Sherman before the talks began.

The Kremlin spokesman, Dmitry Peskov, said in Moscow the same day that “the situation regarding European security and our national interests has reached a critical line”.

He also called Nato “an instrument of confrontation”.

The talks are to continue in Vienna on Thursday at the Organisation for Security and Cooperation in Europe (OSCE), which includes all EU countries as well as Ukraine, but not EU institutions, which have been excluded from the process for the time being.

And for all the handshakes and smiles on Wednesday, Stoltenberg noted that “the military build-up we see in and around Ukraine … continues”.

This included “around 100,000 troops, artillery, armour, drones, tens of thousands of combat-ready troops, and threatening rhetoric,” he said.

“There is a real risk for a new armed conflict in Europe,” he added.

“We have to be prepared for that – that Russia once again chooses confrontation. And therefore we also made it very clear that any use of force against Ukraine will be a severe and serious strategic mistake,” Stoltenberg said.

“If Russia once again uses force … we have to seriously look into the need to further increase our presence in the eastern part of the alliance,” he added.

He hit back at Russian propaganda that Ukraine posed a threat to Russia and that Nato expansion undermined Russian security.

“The whole idea that, in a way, Ukraine threatens Russia is absolutely to put the whole thing upside down. It is Russia that is the aggressor,” he said.

“This crisis is a making of Russia,” he added.

“This idea that, for instance, Nato enlargement is aggressive, is absolutely not true. Nato enlargement has been a cornerstone for the spread of democracy and freedom across Europe,” Stoltenberg said.