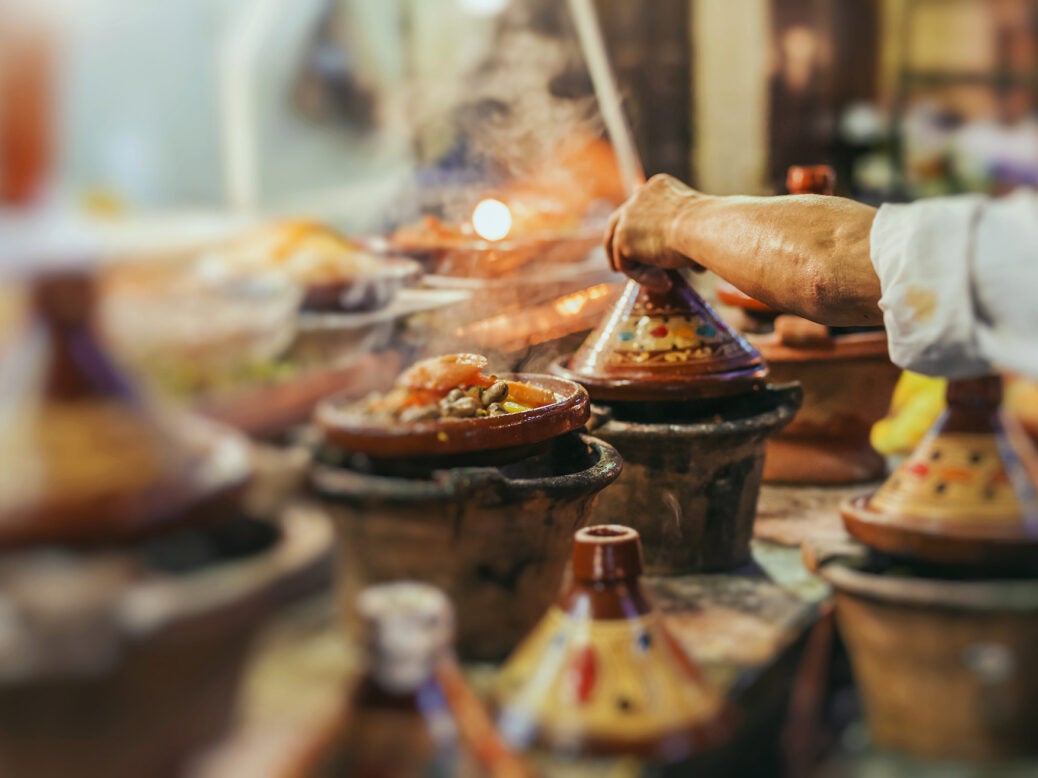 The sky is the texture of television static. I hold my brother’s hand as we arrive at the foot of Derrick House, a block of flats in south London that is about to become our new home.

It is the summer of 1985, I am four years old, and my senses are already attuned to my mother’s resigned mood.

I do not understand his pessimism; I have a thrilling sense of new adventure. The sounds of my footsteps bounce off the walls as I run from room to room.

The flat is bare except for the large chipboard panel leaning against our lounge wall, which the local authority used to secure the front door against squatters.

My mother heaves the wooden panel on to the bitumen floor and instructs me and my brother to sit down on our make-do sofa.

She hands us white paper parcels, which we each unfurl, revealing the chips inside. Pale yellow, plump and still warm. My naive taste buds are enlivened – they are delicate, savoury and satisfyingly squishy.

“Eat up quickly,” my mother says in her native Darija.

Then, in English: “We need to find a mattress, or we’ll be sleeping on the floor tonight.”

This is my earliest food memory.

Senses like taste powerfully evoke memories that help us understand ourselves. Those of us who embody a multiplicity of ethnic and/or cultural identities can often feel we are at once inside and outside of cultural margins. Amid this confusion, food can offer a way of constructing a sense of identity.

When we were young, my brother and I would spend the long summers in Morocco with our late grandparents in their modest bungalow, which sat atop a hill and overlooked the sea.

I would spend all day playing outside, immersed in my imagination, my face glowing with perspiration. Eimti, my great aunt, had a lush fig tree in the middle of her courtyard, which would stretch out its branches and offer respite from the intense heat.

Often when I am cooking, my thoughts go to my grandmother, whom we called “Aziza”. She was a diminutive 4ft 9, yet she commanded respect – and sometimes trepidation – from those around her through her force of personality and rich baritone voice. A favourite meal was fried butterflied sardines with chermoula and shlada (finely diced tomatoes, cucumber and onions with a light vinaigrette).

We would sit on the floor around a low wooden table and use three fingers with khobz (bread) to pincer the food from a large terracotta dish. Eating was a collective, familial act, and a shared pleasure was found in this hand-to-mouth contact.

My grandfather, “Jaddi”, would take a crispy fried sardine or a succulent piece of lamb from his portion of the dish and gift it to me.

“Koolee,” he would say with a wide smile. Eat.

Jaddi, Aziza and Eimti have all since passed. But my grandparents’ small bungalow – and our memories – remain.

Today, as I cook for my daughters – say, a tagine of lamb with prunes, almonds and boiled eggs, or a classic roast chicken with goose-fat roasties and bread sauce – it feels as though I am summoning the past and celebrating our peripatetic DNA.

As I cook, I imagine being surrounded in my kitchen by a throng of matriarchs from generations past preparing the meal with me. Their voices, the sounds of their laughter, carry out through the open patio doors and into the cool breeze.

Elias Suhail is supported by A Writing Chance, a UK-wide project from New Writing North designed to discover new writers from underrepresented backgrounds whose voices have historically not been heard in publishing and the media. You can read work by other writers in this initiative here.

A Writing Chance is co-funded by Michael Sheen and the Joseph Rowntree Foundation and supported by the New Statesman and the Daily Mirror. The project is delivered by New Writing North and literature organisations nationally, with research from Northumbria University.