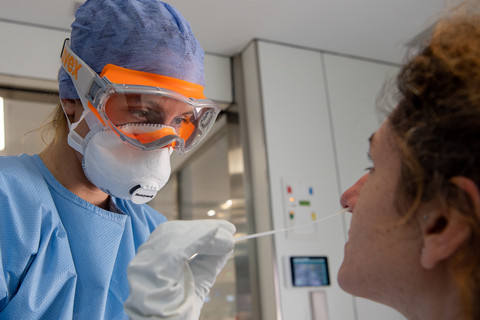 A senior World Health Organisation (WHO) official said on Tuesday (4 January) that hospitalisations and death rates linked to the spread of the more transmissible variant Omicron appeared to be lower than with previous strains.

“What we are seeing now is….the decoupling between the cases and the deaths,” said WHO incident manager Abdi Mahamud.

Mahamud said this could be “good news” – but warned that more research was needed to understand the full picture.

Data from South Africa, where the new variant was first identified, suggests reduced risks of hospitalisation and severe disease of those infected with Omicron.

But the top UN health official warned the situation in South Africa cannot be extrapolated to other countries because each country is unique. South Africa, for example, has a younger population than many countries in Europe.

Omicron, first detected in November, has been now identified in at least 128 countries.

And it is now expected to become the dominant variant within weeks in many places, fuelling Covid cases to record highs and increasing the burden on health care systems across the globe — especially in those countries with low vaccine uptake.

In the US, health authorities reported this week nearly one million new daily coronavirus infections and an increase in the number of hospitalisations.

In Europe, France recorded a record high of 271,000 daily new confirmed coronavirus cases on Tuesday while the UK breached 200,000 daily cases for the first time.

Australia, for its part, also saw a new high on Tuesday, with officials reporting 64,774 new cases.

As the Omicron variant continues to spread around the world, the WHO said that vaccine protection remains crucial.

When asked whether the vaccines will need to be modified to tackle the new variant, Mahamud said that protection against severe hospitalisation and death from Omicron is foreseen to be maintained.

“The challenge has not been the vaccine, but the vaccination of the most vulnerable populations,” he added.

The WHO has urged rich nations to support vaccination in developing countries in order to have 70 percent of the world’s population vaccinated by mid-2022.

The virus replicates in an environment that is “overcrowded, not ventilated and not vaccinated,” said Mahamud.