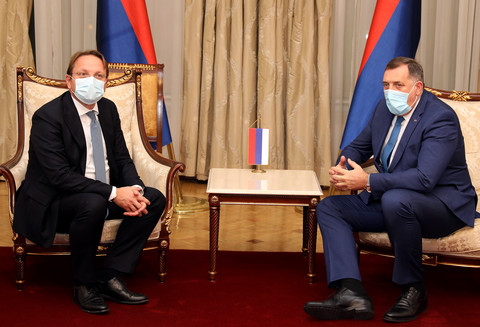 In a letter sent on Wednesday (11 January), MEPs wrote that a leaked internal commission document suggested that Várhelyi “openly colluded [with Dodik] in potentially breaking up Bosnia and Herzegovina”.

The document, signed by Johann Sattler, the head of the EU delegation to Bosnia, was leaked by Bosnian media after the commissioner’s visit there at the end of November.

“The report notes that Commissioner Várhelyi ‘agreed’ with Mr Dodik regarding the date of a special session of Republika Srpska’s National Assembly and that a 6-month moratorium to pass legislation on the unilateral withdrawal from state institutions would be announced,” the MEPs’ letter said.

“Commission representatives cannot appear to appease separatist movements in this manner or act beyond their mandate contrary to official EU policy pertaining to the Western Balkan region,” the letter said, which was drawn up by Hungarian liberal MEP Katalin Cseh.

“If the impartiality and neutrality of the Commission is called into question, the fragile geopolitical balance becomes immediately threatened,” the letter adds.

It asked: “Can we expect a thorough internal inspection to determine wether his actions are compatible with his role as Commissioner for Neighbourhood and Enlargement?”.

Bosnia is currently facing its biggest political and security crisis since the 1995 war, when the Dayton peace agreement was signed.

Last October, Dodik, the Serb member of Bosnia’s tripartite presidency called for RS to withdraw from key state institutions and set up its own ones, in violation of the peace treaty and the constitution.

On 10 December, Republika Srpska’s parliament adopted a series of laws enabling the entity to form its own institutions and its own army by May.

During his visit in November, Várhelyi said that Bosnian Serbs needed to return to the negotiating table and enact reforms or risk losing EU funding.

“Withdrawing the Republika Srpska entity and dismantling the state institutions would take Bosnia further away from alignment with the EU ‘acquis’ [legal structure] and would put the EU path on hold for the entire country,” he said back then.

At the time of the leaked report the commission issued a statement saying that while Varhelyi “was informed” about Dodik’s intention to call for an assembly meeting and begin a process of withdrawing competences, “this does not in any way imply assent or acceptance of these plans”.

One of the 30 MEPs who signed the letter, Slovenian liberal MEP Klemen Grošelj said he expected von der Leyen to make a clear statement that commissioner Várhelyi’s behaviour was “not acceptable” and to launch an investigation.

“If the internal report proves to be true, we have a huge problem,” he told EUobserver.

“This activity of the commissioner is discrediting the common European policy in the Western Balkans, especially in Bosnia, which is going though its most serious crisis after 1995, and it puts the EU in a disadvantageous position compared to other global players active in the region,” he added.

Grošelj said that instead of talking about Dodik’s political timetable, and coordinating with him, Várhelyi should have pressed the Bosnian Serb leader to stop his moves towards secession.

“Any other activities, be it ideologically or nationally driven, are not acceptable, his duty is to represent the EU’s common interest,” Grošelj said.

“He should not do any steps which could be misinterpreted by anyone in region, he should be honest broker and represent the common interest,” Grošelj added.

Another signatory, Dutch social democrat MEP Thijs Reuten told EUobserver what concerned him was that the commissioner did not “unequivocally distance himself from Dodik’s divisive and dangerous policies, and all the genocide denial incidents”.

Reuten said “such a [commission] portfolio needs to be managed in a consistent and credible manner”.

There were already concerns during his confirmation hearing in 2019 that Várhelyi, once a Hungarian ambassador to the EU, would push his former boss, prime minister Viktor Orbán’s agenda, rather than the EU’s.

And Orbán is a key ally of Dodik. In November, he visited Republika Srpska, including Dodik’s hometown of Laktasi, which puzzled some observers.

Orbán recently caused an outcry when he said in December that Bosnia’s 2 million Muslims will be a “challenge” to integrate if the country became part of the EU.

“This commissioner in particular cannot permit himself hints, new hints that link him to Orbán- and Vučić-friendly policies,” Reuten said.

“I don’t have anything against the Hungarian commissioner, but he is constantly linked to the same narrative that we hear from Budapest and Belgrade,” the Dutch MEP said.

The EU has also been under pressure to go ahead with sanctions against Dodik and his circles, but Hungary has made clear it does not support such measures.

And Budapest is providing Bosnia’s Serb entity with €100m in assistance.

In early January, the US imposed additional sanctions on Dodik and accused the Bosnian Serb leader of corruption and threatening the stability and territorial integrity of Bosnia and Herzegovina.

On Wednesday, EU diplomats tasked the commission – on a request by Germany – to come up with a possible course of action on Bosnia, including sanctions. According to an EU source, Hungary did not support the drawing up of the “options paper”.

Bosnia could be discussed at the foreign ministers meeting on 24 January.

“If there is a political will to do it, there is a way,” MEP Grošelj said of possible sanctions, but other sources said the EU would be unlikely to suspend funds or take other punitive measures at this point.

“A huge majority of member states, and the bigger part of EU institutions have an understanding this [secession moves] is a clear and present danger to Bosnia, the region and the EU, and there is a cross-party understanding in the parliament how dangerous the situation is becoming,” Grošelj added nevertheless.

“It is our core interest to support Bosnia and Herzegovina as a single, united, and sovereign country”, the EU foreign service added in the latest draft of its ‘Strategic Compass’, a document on the bloc’s long-term goals, seen by EUobserver.