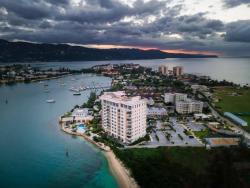 Lawyers representing the Montego Freeport residents are demanding responses from the planning authority by June 30 on requests for new environmental studies to be done on the hotel development.

The hotel is planned for two lots next to the 11-floor Sunset Beach Resort, which was built more than 50 years ago, and next door to SKIL’s two Secrets-branded hotels and the Breathless resort located across the road.

Several environmental permits were recently approved by the planning and environment authority for real estate developments in Freeport with most of the new approvals being for high-rise buildings. One new 10-storey condominium was recently completed while more are believed to be at concept stage.

Several wealthy persons, including some of Jamaica’s leading business moguls, live in the pricey Montego Freeport, said to be largely made up of land reclaimed from the sea in the 1960s. Some of the residents are opposed the Dreams hotel project.

In a June 3 letter to the National Environment and Planning Agency, NEPA, Myers Fletcher and Gordon,the law firm representing Freeport Peninsula Association Limited, FPAL, repeated the association’s objection to the planned construction of the hotel and nearby car park as well as the agency’s decision not to require a new environmental impact assessment, or EIA, study.

An EIA was done in 2007 for the development of the 700 rooms Secrets hotels over five floors which opened in 2010. Since then the company has built the 10-storey 150 suites Breathless Resort on another property.

The FPAL lawyers have requested that two new EIAs be done on the proposed constructions.

“Reliance on EIAs prepared by qualified, independent experts, may either support, or allay the residents’ fears but in any event, will reduce the likelihood of a successful challenge to the NRCA’s (Natural Resources Conservation Authority) ultimate decision,” the law firm noted, asking that the agency replies by June 30 to indicate whether it will agree to the FPAL request.

“Should we not hear from you by June 30, 2022, we will assume that you are standing by your decision to not to request EIAs and advise our clients of other avenues for redress,” the law firm wrote over the signature Gavin Goffe, a partner and head of litigation at Myers Fletcher.

“I have no comment at this time. We are taking advice,” is all Ian Dear, the FPAL president, was prepared to say when the Financial Gleaner contacted him on Tuesday.

Breathless and the proposed 11-floor Dreams hotel are both said to be both covered by a 2007 EIA that was commissioned by SKIL.

It is understood, however, that NEPA did not require EIAs or public hearings before approving several other large developments in the Montego Freeport area, namely a planned 14-storey mixed residential, hotel and commercial development of up to 500 rooms by PanJam, a 12-floor residential development by Winfra Development Consortium headed by businessman Dr Guna Muppuri, as well as the 10-storey Soleil residences completed just over a year ago and owned by businessman Brian Jardim through his company Sharkfin Development.

PanJam CEO Joanna Banks and Muppuri both confirmed this to be the case for their respective developments, but said they followed all other application requirements. Representatives of the other companies did not immediately respond to Financial Gleaner requests for comment .

A NEPA-mandated public consultation was conducted by SKIL on April 24. The CEO of NEPA Peter Knight said at June 1 meeting with residents and other stakeholders not including SKIL, that outline planning permission was sought by SKIL to build “261 additional rooms and other amenities”.

But SKIL director Michael McMorris has said the Dreams hotel would comprise 281 rooms.

McMorris also clarified that the proposed development is to sit on two lots comprising 4 acres of land and not 2.5 acres as stated at the June 1 meeting.

The land titles for site of the proposed development indicate that the combined area of the two lots is 4.8 acres. However, as noted in the 2007 EIA commissioned by SKIL, the area is prone to erosion by the sea and some of the land could have been lost over time. McMorris told the Financial Gleaner on Tuesday that the proposed development is expected to include land reclamation once the appropriate permits are applied for and received, as was done for the Secrets property.

Montego Freeport area is zoned for both residential and resort use in the 2018 provisional St James Development Order.

“Proposals for hotels, guest houses and other service accommodation will normally be permitted along the coast, within built-up areas and in areas identified for the purpose where the facilities are available to service this type of activity subject to the siting, design, environmental, visitor management, and climate change considerations being satisfactory,” the provisional development order states.

Barnett said the sewerage system for Freeport is serviced by a series of relift stations connected to the Bogue treatment ponds nearby which he said have not yet reached three quarters their holding capacity.

The NWC, he conceded, was in need of additional sewerage pumping capacity to adequately serve the Freeport area. He explained that the hotel’s developer would need to approach the NWC and pay the standard fees for upgrade to the pumps to accommodate the additional development.

Barnett added that around 2007 to 2008 a developer, which he did not name, undertook major construction in the Montego Freeport area and paid for improvements to the sewerage pumping system there. The time period coincides with the development of the Secrets resorts between 2006 and 2010.