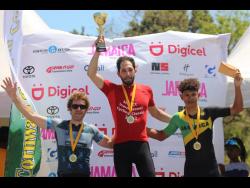 NATIONAL CYCLIST Jerome Forrest outlasted the sector to seize stage two of the Jamaica Montego Bay Worldwide Biking Basic (JMICC), however his win was short-lived, as he was relegated to eleventh place, following a race infringement.

Forrest and his Jamaica Elite One staff had the win taken away and had been docked factors after it was confirmed by Trinidadian race commissaire, Rowena Williams, that the staff’s teaching workers had used radios to speak to the riders through the race, which was not permitted.

Forrest was then stripped of the win and a doable 23 factors. In keeping with nationwide coach Adrian Clarke, the relegation was unlucky.

“Those rules were not officiated to us at the technical meeting but, yes, it has set us back and it was an obstacle in our way, but we will just have to double our effort for today’s final stage.”

Within the meantime, American Andy Scarano, who completed second within the 86-mile return race from Whitter Village to Discovery Bay, was promoted to first place. Scarano who claimed the opening day stage race has now jumped out to a 24-point lead within the total standings with 46 factors.

His teammate Brenden Cornett from Workforce 706P jumped to second whereas Jamaican Underneath-23 rider Khori Mauricette led to third place. Cajur Chue from Workforce MoBay and Andrew Ramsey from Workforce Jamaica Elite rounded out the highest 5.

For Scarano, the stage win was a bittersweet one, having battled for shut to 3 hours with Forrest over the hilly terrain in Duncans.

“It’s unfortunate for Forrest that he was relegated and that it turned out that way, he was a strong sprinter and rider, but the rules are the rules. Today is going to be a shorter race so it will play out more aggressively and we have to be on full gas from early and hopefully we can hold on to the lead.”