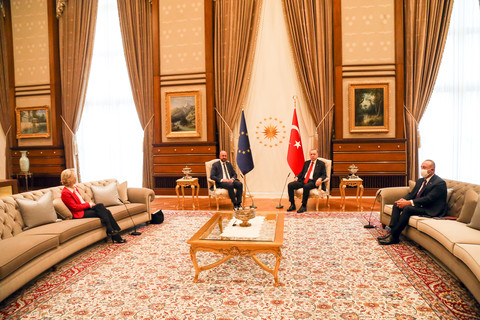 It’s clear that the strategic relationship between Turkey and the EU has worsened in the past few years. However, as much as Turkey needs the European Union and Nato for its security, the EU and Nato need Turkey too.

In a few, crucial, neighbourhood areas the EU should consider cooperating with Turkey in a much more strategic way.

In a non-exhaustive list, Turkey could play an important role in Syria, in the Western Balkans, the Black Sea, and Afghanistan.

More strategic cooperation doesn’t mean the EU should stop pushing Turkey on human rights and freedom of the media. At the same time, Europeans need to acknowledge that Turkey is more than just its president.

Since the start of the conflict in Syria in 2011, Turkey has played an essential role – into which it was almost inevitably pulled due to its long border with Syria.

Turkey was one of the very few countries where people could flee the bombardments of the Assad regime.

The country was also one of the few countries that provided aid to the refugee camps inside Syria, as international aid went via Damascus and thus hardly reached the opposition-controlled areas.

Turkey started direct military intervention in Syria in 2016, after a call for a no-fly zone was rejected by the West. Turkish occupation of two northern parts of Syria was a de facto installing of a no-fly zone over these areas, blocking Assad’s forces and Russia’s.

Turkey agreed with Russia to start peace talks in Astana (now Nur Sultan) in December 2016, including with Iran, for ceasefire negotiations.

The Astana process, which is still ongoing, started without the involvement of either Europe or the United States.

The fact that the EU and the US are still not officially included in the Syria peace process makes Turkey our (only) partner at the negotiation table.

There is only one way to stop the massacres and the stream of refugees, and that is finding a solution for Syria. For that purpose, the EU needs Turkey.

Meanwhile, the European Union is losing credibility in the Western Balkans.

While Slovenia and Croatia have already joined the EU, several EU member states are hesitant to go further, despite previous promises.

The opening of accession talks with North Macedonia and Albania should have been a fact by now, as both countries fulfilled the requirements of the process.

However, the Netherlands, France, and Bulgaria have been blocking both countries’ membership.

As a result, we see now a political crisis brewing in North Macedonia. Other countries, such as Serbia, Kosovo, and Bosnia and Herzegovina, are getting worse – rather than better – on the corruption, rule of law, and reconciliation scorecharts.

With its enlargement process stalled, the EU is losing leverage in most of the Western Balkan countries.

Due to its history, Turkey is seen by most Western Balkan countries as an honest broker. Turkey knows the region without firmly supporting one side.

As tensions are flaring up in Bosnia and Herzegovina, and between Serbia and Kosovo, the EU might need Turkey’s expertise to lower these and find solutions.

The European Union lacks military capabilities, but also military strategy. Since the UK left the EU, France is the only military powerhouse in the bloc.

France and Turkey have been on opposite sides in conflicts such as Libya, and in Middle Eastern politics in general. France, an old-time ally of Armenia, didn’t appreciate Turkey’s open support for Azerbaijan and its conquest of Nagorno-Karabakh.

It is time to put these confrontations aside, and start to think more strategically about the Black Sea. Turkey is a necessary and essential partner in the Black Sea region.

More strategic cooperation between the EU and Turkey is the only way forward to stop further Russian expansionism.

Without the war in Syria, the rise of ISIS and the cruel bombings of the Assad regime, there would never have been a Syrian refugee crisis in 2015.

If Libya had not collapsed politically in 2013, we would not have seen the thousands of boats trying to reach European soil, and tens of thousands of refugees drowning in the Mediterranean.

In the cases of both Syria and Libya, a total collapse could have been avoided. In Syria, a no-fly zone would have saved many lives and would have changed the course of the war. There would never have been the chaos we have seen and therefore no ISIS take-over of large parts of the Syrian territory.

Libya too could have avoided violence if the political deadlock in 2013 had been solved politically.

Everyone who knows Libya saw the trainwreck coming and could have stopped it. It has not been done, mostly because of international disagreements. We have to learn lessons from these two conflicts if we want to avoid another refugee crisis. Therefore, we need to support as much as possible the current political transitional process in Libya.

More importantly, the EU and Turkey should keep their eyes open for possible new conflicts that will push people into fleeing their countries.

Obviously, there is Afghanistan – where Turkey is already playing a securing role. A second possible conflict zone is Iraq, a neighbouring country of Turkey. There are the Western Balkans and there is the Black Sea region.

For each one of these possible conflicts there is no other route for Turkey and the EU other than to cooperate. Therefore it is time for the EU and Turkey to put aside past sensitivities, albeit by learning from them, and urgently seek for strategic collaboration at the highest levels.