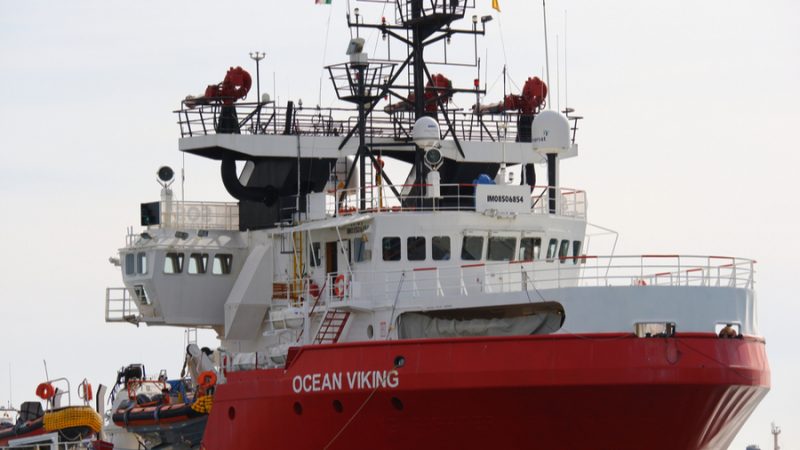 Delays caused by the blocking of the Ocean Viking rescue ship by Italian port authorities have put human lives at stake, Julia Schaefermeyer, communications officer at SOS Mediterranean, the NGO that charters the vessel, has told EURACTIV.

The vessel used to save migrants attempting to cross the Mediterranean Sea was detained in the Sicilian port of Trapani on Monday (10 February) where it was due to be subjected to a port state control.

“We are not able to continue our life-saving missions while the ship is detained. We know that 2022 was a particularly deadly year in the Central Mediterranean. The International Organisation for Migration estimates that 1,553 people lost their lives last year. So this is particularly painful for us,” Schaefermeyer said in a telephone interview from Trapani.

The Ocean Viking’s last mission ended with the disembarkation of 114 survivors in Trapani on Christmas Day. The NGO was notified that the vessel should undergo its annual port control and the inspection took place on Monday and ended with the ship’s detention.

Schaefermeyer explained that the Ocean Viking had been subjected to a total of six port state controls in two and a half years, more than the expected one a year. These controls often lasted between nine and 12 hours, and the Ocean Viking passed “most of them” but was detained twice, once in summer 2020 and the second time now, on different grounds.

“What’s really hard to comprehend is that there always seems to be new regulations that are applied to us. It seems like extreme scrutiny we are under. While we acknowledge the importance of these port state controls, we also know we are not the only humanitarian vessel that has had to suspend its operations for these reasons,” she said.

She explained that communication with the Italian authorities was formal and involved multiple stakeholders, including the ship’s owner, regulatory bodies, maritime administrations and the classification society, as the NGO only charters the vessel.

In terms of the alleged deficiencies, Schaefermeyer explained that “the other stakeholders will need to enter into the dialogue to assess how to rectify them”, but that she was keen to “resume our operations as soon as we can”.

Thousands of migrants attempt to cross the Mediterranean every year, mainly from Tripoli, and head towards Italy. Vessels used are often unseaworthy, not subject to any checks, and are overcrowded without life-saving equipment.

When a vessel gets into difficulty in the search and rescue area of an EU state, it is up to that state to take responsibility. Other migrant vessels are intercepted by rescue vessels run by NGOs, or by passing ships.

Once the migrants have been picked up, a political and diplomatic struggle starts to find a port that will allow the disembarkation of those on board. Malta, situated in the middle of the Mediterranean route, has flatly refused to allow disembarkation.

Maltese authorities have refused to allow the disembarkation of over 200 migrants rescued within its own search and rescue area last week.

The migrants, including four pregnant women and eight children, two of which are injured, were rescued in four operations …

The EU has ploughed millions of euros into training the Libyan Coastguard and providing vessels and equipment to carry out their own search and rescue missions. This entails returning migrants to Libya, which is controversial and potentially illegal due to the human rights situation once the migrants arrive.

Those who are not picked up by a rescue vessel fend for themselves and often perish. An average of four people died every day in 2021 while attempting to make the journey.

The situation in Libya

The reality for migrants in Libya remains concerning.

“We continue to think about the people still trapped in Libya who we know will continue to have to risk their lives to escape that situation,” Schaefermeyer said.

In many cases, those trying to attempt the crossing get intercepted by the Libyan Coastguard and are sent back to detention centres, where they have to “buy their way back out each time” before attempting the crossing once more.

“I spoke to a 23-year-old man from Nigeria who goes by the name Favre. He told me the sea is used as a business, and there is a system he is trapped in where he has to pay his way out of detention and onto boats. Each time he is intercepted, and the cycle starts again,” Schaefermeyer explained.

She added that many survivors report being beaten and forced onto boats by heavily armed smugglers. Others say there were sold and trafficked multiple times during their journey to Libya.

“People then find themselves forced into unpaid labour held for ransom and key in arbitrary detention. So basically, at each step of the way, we hear from people that they were being treated like merchandise, or worse, in some cases,” she added.