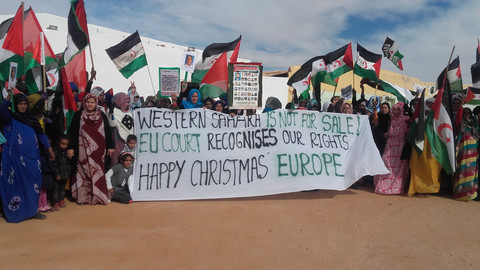 Since hostilities between Morocco and the pro-independence Polisario Front in Western Sahara resumed in November 2020, the EU has been reluctant to play an active role in the conflict.

But a recent EU Court of Justice ruling against the inclusion of Western Sahara in the EU-Morocco trade deal could soon force Brussels to step into the fray.

Rather than attempting to circumvent the verdict, as it did in 2018, the EU should seize this opportunity to review its policy on Western Sahara and start leveraging its economic influence to push both sides to resume negotiations and find a mutually acceptable solution.

Since 1975, Morocco and the Polisario have been locked in a conflict over Western Sahara. While fighting ended in 1991 thanks to a UN-mediated ceasefire, diplomatic efforts have failed to produce a permanent solution.

Following a long deadlock, tensions escalated again in November 2020 after the Polisario blockaded a main road through the disputed territory’s Guerguerat area.

The kingdom responded by sending its troops to remove the blockade and the Front promptly resumed its attacks on Moroccan troops. Despite the ceasefire’s collapse, the UN was very slow to react. Only last month did it move to appoint a new special envoy, the seasoned diplomat Staffan de Mistura, who now faces the task of restarting talks between the two sides.

Europe has cause to be concerned about the deteriorating situation in its neighbourhood. In mid-May, Morocco allegedly encouraged thousands of people to cross the border into the Spanish exclave of Ceuta, which was suddenly overwhelmed by an unprecedented inflow of mostly Moroccan migrants (Rabat denies doing so).

The move was in apparent retaliation for Madrid’s hosting of Polisario leader Brahim Ghali, who needed urgent medical treatment for a severe case of Covid-19.

Morocco has also suspended all diplomatic contacts with and recalled its ambassador from Germany in protest over Berlin’s late-2020 attempts to raise the issue of Western Sahara at the UN Security Council, where Rabat worries it could face criticism.

Meanwhile, the conflict has also had repercussions within the EU.

For almost a decade, EU-Morocco trade relations have been at the centre of a long-running legal struggle. In November 2012, the Polisario challenged the agricultural and fishing liberalisation agreement that the EU and Morocco had signed only a few weeks earlier.

Four years later, the EU Court of Justice ruled against the inclusion of the disputed area in that agreement, highlighting that Western Sahara has a “separate and distinct status” and could be included lawfully in the agreement only with its population’s explicit consent.

Morocco’s reaction was hard-nosed, freezing all diplomatic contacts with the EU for several weeks to signal its displeasure with the court’s decision.

This convinced the Europeans to try to circumvent the ruling, signalling implicitly that it valued the bilateral trade relationship with Morocco more than its own adherence to the court’s decision and the rule of law.

In 2018, the EU and Morocco amended the deal to explicitly extend it to Western Sahara on the basis of consultations European diplomats had conducted with mostly pro-Rabat political, economic and civil society actors in the territory as a way of claiming to have received the local population’s consent.

These amendments clearly did not sway the court.

In a new ruling on 29 September 2021, it again invalidated Western Sahara’s inclusion in the deal. Brussels and Rabat seemed committed to preserving the contested deal.

On 6 November, King Mohamed VI warned that “Morocco will never engage in any economic or commercial transaction… in which the Moroccan Sahara is not included”, alluding to the verdict, while on 19 November the EU Council decided to appeal the ruling.

This ruling gives the EU a fresh opportunity to recalibrate its position and start using its economic leverage to encourage Morocco and the Polisario to get back to negotiations.

The conflict has an economic dimension that has been underestimated. Inside Rabat-held Western Sahara, Morocco has secured local elites’ support for its policies by granting them monopolistic business licences and other benefits in various sectors, including agriculture and fishing.

These pro-Rabat leaders have become increasingly entrenched, posing an obstacle to change.

Meanwhile, a large section of the local population is frustrated with a status quo that has not delivered the jobs and housing they need. Likewise, in the Polisario-controlled refugee camps in Algeria, the youth’s frustration with the diplomatic stalemate and demand for better socio-economic conditions have played a major role in the recent escalation.

The EU should use carrots and sticks to encourage these constituencies, as well as Morocco and the Polisario, to soften their positions and engage in diplomacy.

Brussels should not only comply with the court ruling by reintroducing quotas and tariffs on produce and fish from Western Sahara, but could leverage it to pressure those elites who are among the main beneficiaries of the status quo to drop their opposition to a potential compromise.

Removing Western Sahara produce from the deal would raise the cost of the diplomatic stalemate.

While Rabat would likely retaliate diplomatically, the EU could argue that it is respecting a binding legal ruling and point to its differentiation policy with regard to Israel and the occupied Palestinian territories as precedent.

At the same time, the EU could lure Morocco and the Polisario back to negotiations by offering to set up an international trust fund for Western Sahara to be activated only in case of a mutually acceptable compromise.

The resources needed to promote job creation and infrastructure building for a population of less than one million would be relatively inexpensive for the EU, which could ask the US, the International Monetary Fund, the World Bank and the African Development Bank to chip in as well.

The fund should focus on financing job creation and affordable housing to address two of the local population’s major concerns and help resettling refugees in Western Sahara.

It could also reassure local elites of their political and economic survival were there a transition to new political arrangements as a result of negotiations. It could also entice those parts of the Sahrawi population in Western Sahara and the youth in the camps who oppose a resumption of talks to drop their opposition.

These incentives could reverse the recent escalation in tensions and encourage Morocco and the Polisario to go back to negotiations. The EU could explicitly throw its weight behind De Mistura’s efforts.

The new envoy should aim to revive the 2018-19 roundtable format, which included Morocco, the Polisario, as well as Algeria and Mauritania as observers.

He should ask the two sides to submit a revised version of their respective plans for resolving the conflict: Rabat’s autonomy plan (which would devolve powers to Western Sahara while keeping it under Moroccan sovereignty) and the 1991 UN Settlement Plan, based on a referendum on independence, which the Polisario would like to resurrect. Once updated, these plans could form the basis of the next round of talks.

The Western Sahara conflict has already had repercussions on the EU and its member states and these could escalate further in the next months if the situation continues to deteriorate.

By leveraging its economic influence on the conflict, the EU would not only abide by its own rules and support De Mistura’s efforts to resume negotiations, but it could also contain an increasingly dangerous situation close to its borders.