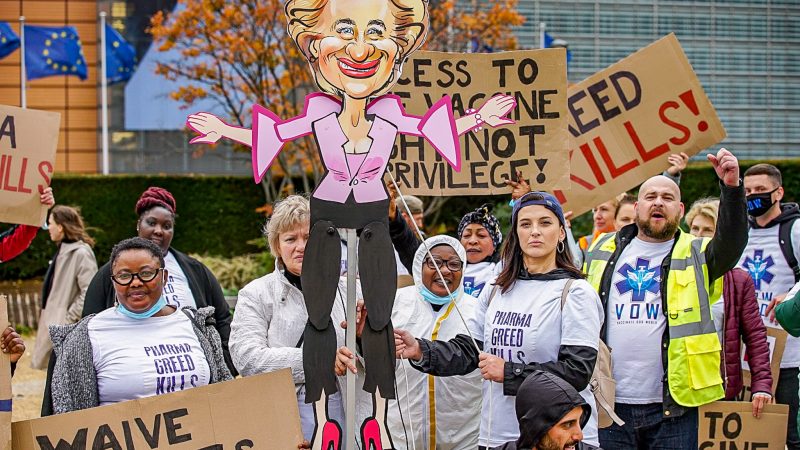 Despite tentative steps to bring vaccine production to poorer countries and generic commitments from world leaders, global access to the COVID-19 vaccine is still far from equal.

At the end of October, the World Health Organisation (WHO) warned that only five out of Africa’s 54 nations are projected to hit the year-end target of fully vaccinating 40% of their populations.

“The looming threat of a vaccine commodities crisis hangs over the continent,” said Matshidiso Moeti, WHO regional director for Africa, adding that drastic measures must be taken.

The situation is no better in other parts of the world as just 261 million of 1.8 billion doses pledged by wealthy nations have arrived in low-income countries, according to research by the People’s Vaccinealliance, a coalition of groups that includes Oxfam, ActionAid and Amnesty International.

The study also highlighted that only 120 million of 994 million doses promised to COVAX, the global vaccination system that the EU and the United States are the two largest donors have been delivered so far.

Some steps to address the issue have been taken in the past weeks by vaccine manufacturers such as Comirnaty’s maker BioNTech, who committed to building a vaccine production facility in Rwanda next year.

Vaccine manufacturer Moderna has recently pledged in a memorandum of understanding with the African Union to scale up production in the continent and supply up to 110 million doses of COVID-19 vaccine throughout 2022.

However, civil society organisations active in global access to health have considered these commitments empty promises as they do not include technology transfer from wealthy to low-income countries.

Instead, they call for lifting patent protection, even for a limited period. This move would allow countries to produce their versions of the vaccine.

India and South Africa first tabled the issue of waiving IP rights for COVID-19 treatments and vaccines in a proposal to the World Trade Organisation (WTO), backed by around 100 other countries.

The waiver would cover obligations in four sections of the Agreement on Trade-Related Aspects of Intellectual Property Rights (TRIPS) that involves copyright and related rights, industrial designs, patents, and undisclosed information protection.

Ahead of October’s G20 summit in Rome, activists held protests in different capitals, including London, Kyiv, The Hague, and Tbilisi. In Brussels, they rallied at the Schuman roundabout, in the heart of the EU district, just in front of the European Commission.

“If we don’t boost worldwide vaccine production and prioritise vaccinations for our global community, COVID-19 and effects from the pandemic will only get worse,” said an activist during the protest.

In Rome, world leaders renewed their commitment to the global goals of vaccinating at least 40% of the population globally by the end of 2021 and 70% by mid-2022, as recommended by the World Health Organisation (WHO)’s global vaccination strategy.

“We will support increasing vaccine distribution, administration and local manufacturing capacity in LMICs, including through technology transfer hubs in various regions, such as the newly established mRNA Hubs in South Africa, Brazil and Argentina, and through joint production and processing arrangements,” the final declaration of the G20 leaders said.

Although they committed to expanding and diversifying global vaccine manufacturing capacity at the local and regional level, it is still unclear how they will put it into practice.

Other than that, it seems that the discussion on the IP waiver is not making much progress. However, something is expected to be adopted before December at the WTO ministerial conference.

In the conclusions of October’s EU summit, 27 European leaders called “for the rapid removal of obstacles hampering the global roll-out of vaccines, and invites the Commission to further engage directly with manufacturers in this respect.”

“The EU will continue to support the production and uptake of vaccines in partner countries,” the text of the declaration continued.

Meanwhile, the European Commission has promised to help finance vaccine production hubs in several African states, a programme that could help respond to future pandemics.

However, the EU and African officials are still at loggerheads over whether to waive intellectual property protection for COVID vaccines.

It is thought the EU opposed patent waivers from the beginning, proposing an alternative to expand the production of COVID-19 vaccines and treatments, which primarily focuses on compulsory licensing.

On 21 October, the European Parliament adopted a resolution calling the Commission to develop a global and public vaccine strategy that addresses equitable worldwide distribution.