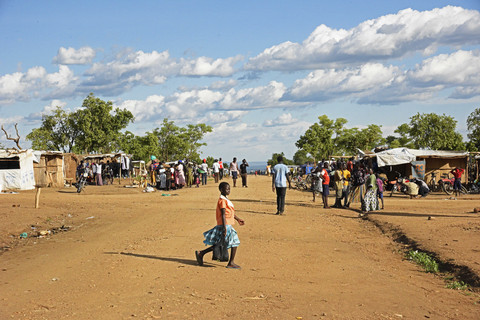 However, this sixth mass extinction differs as it’s entirely caused by one destructive force: humans, or more specifically, the world’s richest humans.

This latest announcement is a shocking example of the unprecedented speed at which human induced climate change is affecting the natural world, and scientists believe that within a few centuries, 75 percent of all species could cease to exist.

Indeed, this isn’t just a horrible loss of the world’s plants and animals, it’s the latest example of the Global North’s climate debt – incurred over centuries of economic expansion which has disregarded and harmed the Global South. After all, the world’s wealthiest remain responsible for 80 percent of all greenhouse gas emissions since the Industrial Revolution.

And on that quest for wealth and power, the Global North catalysed a sixth mass extinction that is predominately and disproportionately affecting the Global South.

For example, Africa, where I’m from, is already feeling the effects of this loss of biodiversity; millions face food insecurity, soil infertility, water shortages, natural disasters – and even pandemics. East Africa is suffering from a drought so extreme herders have lost up to 70 percent of their livestock, and 26 million in the region are struggling to access food.

But it’s not only Africa.

In South America, Brazil witnessed drought-fuelled wildfires which killed around 17 million animals in 2020 alone, harming crop yields and even human health. And in southeast Asia, Malaysia experienced floods so severe the country requested funds from the UN to fight climate change for the first time.

But this is only the tip of the iceberg.

As the world’s poorest battle a tidal wave of natural disasters, wealthy countries are implementing policies with known environmental harms. For example, the UK recently approved the use of pesticides which are known to kill bees – one of the last defences against irreversible climate change. After all, bees are responsible for pollinating one-third of the world’s food supply.

Currently, 75 percent of the world’s food supply is sustained by just five animal species and a dozen crops – leaving it extremely vulnerable.

Covid-19 has hindered the UN target to eradicate hunger by 2030. Current predictions show that around 660 million people could face hunger by the end of the decade, largely due to the pandemic’s long -term impacts on global food security.

Again, the Global South is hit hardest with sub-Saharan Africa and South Asia witnessing the highest levels of hunger.

For too long the Global North has ignored the damage it’s done. And solutions – such as the $100bn [€89bn] climate financing pledged by wealthy nations to the developing world – have failed to materialise.

The ongoing biodiversity crisis is largely driven by human activities including deforestation, hunting, and overfishing. While the Global South is bearing the burden of these activities, they result from growing demand for food from Western consumers.

So, what needs to happen?

The Global North must work with the Global South to reach the climate goals necessary to save our planet. This means revisiting trade agreements, environmental policies, and economic frameworks which for too long have benefited an unjust and unsustainable global economy.

The carbon emissions of the richest one percent more than doubles the emissions of the poorest half of humanity. Despite numerous pledges and calls for solidarity from rich countries – most recently at COP26 – these have failed terribly.

It’s about time for the Global North to accept accountability of its bad habits.

Part of this is acknowledging the Global South’s efforts to build sustainable and more resilient economies. A good example comes from Malaysia which has revolutionised its palm oil sector and enforced a nationally-mandated certification scheme to ensure due diligence throughout the entire supply chain for the commodity found in 50 percent of supermarket products. The Malaysian Sustainable Palm Oil (MSPO) scheme has resulted in 93 percent of produced palm oil meeting strict environmental standards.

However, schemes like this are all too often ignored by the Global North who are instead making empty climate promises and isolating the Global South’s attempts by issuing outright bans and boycotts in favour of alternatives with greater environmental effects.

The issue isn’t that voices from the Global South simply aren’t heard – they are actively muted. A recent study by Carbon Brief found that less than one percent of climate research papers were written by African authors, despite the continent being the most vulnerable to climate change.

What is happening in the Global South does not exist in a vacuum. And ultimately, it serves as a reminder that we can’t all escape climate change’s impact on our societies. Part of this means recognising the Global North’s historic role in catalysing this unprecedented extinction event and working together to find common solutions.

Without urgent intervention, these devastating events won’t only represent the worst example of human destruction, but will harm economies, public health, political stability, and any attempt to reckon with climate change.

Meaning that this sixth mass extinction could be humanity’s first and last.