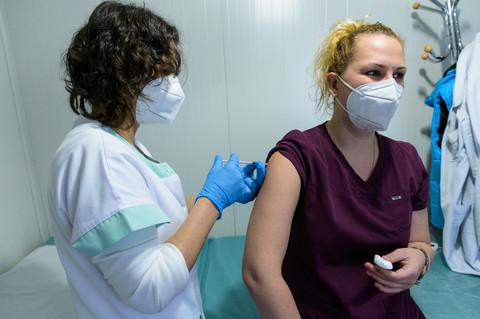 Currently, French citizens only need to show proof of a negative test to enter gyms, restaurants, cultural institutions, and domestic flights and long train journeys, but from mid-January, this will no longer be enough.

The government approved the proposal on Monday, but parliament has yet to rubber-stamp it.

“The situation is extremely tense in France and Europe. A new wave is sweeping our continent,” said the prime minister.

He stressed that more than 100,000 positive tests were recorded in France on Saturday – the highest number ever.

The number of hospital admissions and deaths was also increasing.

Figures from Monday showed that more than 3,300 people were in intensive care, above the ‘crisis threshold’ of 3,000 set by authorities.

According to the French government, the solution was still its vaccination campaign, but additional measures have also been announced.

Mask-wearing will be mandatory in town centres, with local authorities in charge of enforcing the measure.

Consumption of drinks and food will be banned in long-distance transport and cinemas. And only seated customers will be allowed to consume food and drinks in bars and restaurants.

Home-working will become mandatory for at least three days per week where possible.

New rules for isolation periods after a positive Covid-19 test result or for contact cases will be announced at the end of the week.

Castex said these were necessary due to the unique “characteristics of Omicron” compared to other variants.

Some studies suggest Omicron is milder than the Delta variant of the virus, with a 30 to 70 percent lower chance of infected people ending up in hospital. But there are fears the sheer number of cases could overwhelm hospitals anyway.

Meanwhile, there will be no changes to the French school calendar.

Students will return to school as previously planned on 3 January, and Castex did not bring in a New Year’s Eve curfew.

The minister said that 90 percent of eligible people over five years old had already been vaccinated.

“I know that it feels like a film without ending, but a year ago we started our vaccination campaign and now we are one of the best vaccinated and best-protected people in the world,” he said.

And while digital cards may be an important tool for fighting viruses, last week, France’s interior ministry warned that at least 182,000 fraudulent sanitary passes had been created since the rule was imposed in the summer.

Prime minister Castex expressed his frustration about this on Monday and said fake card carriers will be punished more severely.

The announcement came amid a tightening of restrictions all over Europe.

Gatherings in Germany have been restricted and gyms, swimming pools, nightclubs, and cinemas will be closed to the public in several regions.

But in contrast, British prime minister Boris Johnson has said no further Covid restrictions will be implemented in England before the new year.