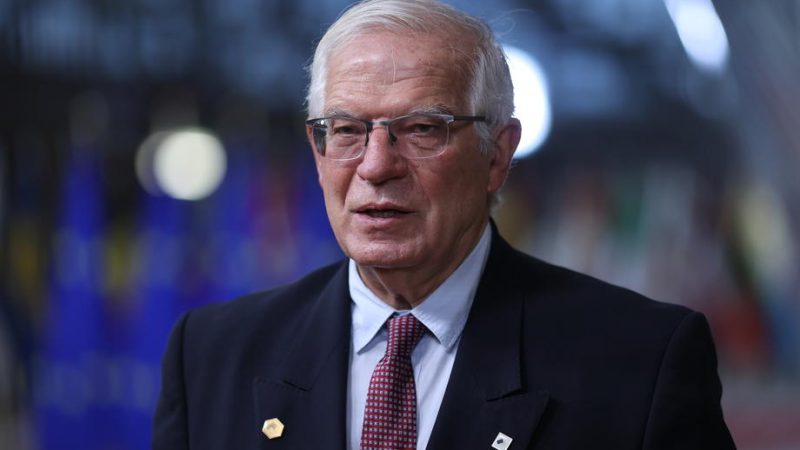 The EU’s chief diplomat Josep Borrell will visit Ukraine’s frontline later this week, the European Commission has announced, in a show of support for Kyiv amid Russia’s military build-up along its border.

Tensions between Moscow and Ukraine have soared in recent months and the West has warned that Moscow could be planning a full-scale invasion of its neighbour after amassing some 100,000 troops at the frontier.

Borrell’s visit to Ukraine comes just before high-ranking officials from the US and Russia are set to hold two days of bilateral talks in Geneva on Sunday (9 January).

Topics on the table include nuclear arms control and mounting tensions over Ukraine, compounded by the Kremlin’s issuance of a raft of demands to Washington earlier in December.

Russia made bold ultimatums to NATO and the West by presenting two proposals on Europe’s security architecture, to which the answer will most likely be “no”.

The West has rejected what it claims is a bid by Moscow to dictate the future of independent allies and threatened Moscow with “severe costs” if it launches renewed military actions against Ukraine.

Another round of talks is planned for mid-January with a session of the Russia-NATO Council shortly after on 12 January and meetings with representatives of the Organisation for Security and Co-operation in Europe (OSCE).

EU diplomats believe the proposals are intended to distract from the situation around Ukraine and that the demands, which go to the maximum Russia could ask for, are not designed to be accepted but rather restore Russia’s place as an equal negotiation partner.

Borrell, who will meet Ukrainian officials in Kyiv during his visit from Tuesday to Thursday, has insisted that “any discussion about European security must happen in coordination with and participation of EU”.

“We do not want to and must not be an uninvolved spectator, with decisions being made over our heads,” Borrell said in a recent interview, where he added US Secretary of State Antony Blinken shares a similar view.

The EU side fears it is being sidelined as the two nuclear powers discuss the balance of power in Europe in talks reminiscent of the Cold War era.

In 2022, EU foreign policy looks towards some fire fighting to salvage what is left of the once-dominant dream of building a ‘ring of friends’ from the Caucasus to the Sahara.
Over the past year, Europe has woken up to the …

Jointly with his Ukrainian counterpart Dmytro Kuleba, Borrell will also visit the ‘contact line’ in the country’s East, where Ukraine’s armed forces face off against Russia-backed separatists.

A recently announced ceasefire between Ukraine and pro-Russian separatists in eastern Ukraine over the Christmas holidays has not been holding, with both sides accusing each other of new violations.

All previous ceasefire agreements — including the previous truce agreed in July 2020 — crumbled.

Russia seized the Crimea peninsula from Ukraine in 2014 and is accused of inciting a bloody conflict in the east of the country that has killed over 13,000 people.

Moscow insists that US-led military alliance NATO must rule out granting membership for ex-Soviet Ukraine and roll back its forces near Russia’s border.

Russia also has cultivated close ties with pro-Russian rebels controlling swathes of the Donbas region of eastern Ukraine but denies being a party to their seven-year war with Ukrainian government forces.