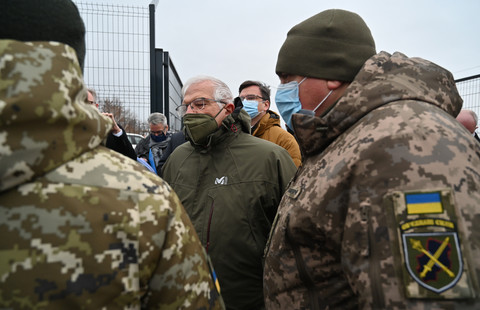 The EU’s foreign affairs chief on Wednesday (5 January) warned during a visit to Ukraine that Europe has to be part of talks between Moscow and Washington on security guarantees Russia has sought over Europe.

Josep Borrell visited the frontline of Ukraine’s war with Moscow-backed forces, the first EU top diplomat to do so since the outbreak of the conflict in 2014.

Borrell again reiterated that there will be “massive consequences and severe costs” for Russia if it launched a new military offensive against its neighbour.

Russia had denied it plans to attack Ukraine, and accused Kyiv of stoking tensions in the region.

In Ukraine, Borrell warned the US and Russia that the EU should be at the negotiating table.

“We are no longer in Yalta times,” Borrell said during his visit to Ukraine.

“Spheres of influence for two big powers do not belong  in 2022,” he added, referring to the deal struck between the leaders of the Soviet Union, the US and the UK that divided Europe after the second world war.

“The security of Europe, of Ukraine, because Ukraine is part of Europe, first and foremost affects Ukrainians and Europeans,” Borrell told a press conference during the visit.

“If Russia is really willing to talk about security in Europe, then Europeans have to be part of it,” he said.

Moscow and Washington will hold talks next week on the security demands made by Russian president Vladimir Putin – which would prevent Nato from accepting new members in eastern Europe, and would redesign the continent’s defence.

US and Russian officials will meet in Geneva next Monday, before the Russian delegation attends a special session of the Nato-Russia council in Brussels two days later.

Ukraine, for its part, is only expected to be attend broader talks with Russia organised by the Organisation for Security and Co-operation in Europe (OSCE), scheduled for 13 January.

In the meantime, Germany’s foreign minister Annalena Baerbock and her US counterpart Antony Blinken on Wednesday reiterated again that Russia would face “massive” consequences if it launched another invasion in Ukraine.

However, they did not go into details about possible sanctions.

Baerbock told a press conference that “Russia’s actions come with a clear price tag”, and a renewed violation of Ukraine integrity will have severe consequences.

“The only way out is dialogue,” she said, adding that “there is no alternative to politic solution”.

The German foreign minister also warned, however, that Europe should be part of talks on its security.

“It is out of the question, and let me make this very clear – there cannot be a decision on the security in Europe without Europe,” she said.

“It is crucial and pivotal to involve the partners in Europe which are affected,” Baerbock added.

Blinken did not address the issue. However, he called on the EU and Germany to block the Nord Stream 2 pipeline project if Russia renews its aggression.

“If Russia renews its aggression toward Ukraine, it would certainly be difficult to see gas flowing through it in the future,” he said. This actually gives the EU leverage over Russia rather than the other way around, he added.

The pipeline has been a controversial point between the US and Germany. It is designed to bring gas from Russia to Germany avoiding Ukraine. The project has been under threat of US sanctions.

Baerbock did not say if the pipeline would be operationalised in the event of a Russian intervention.