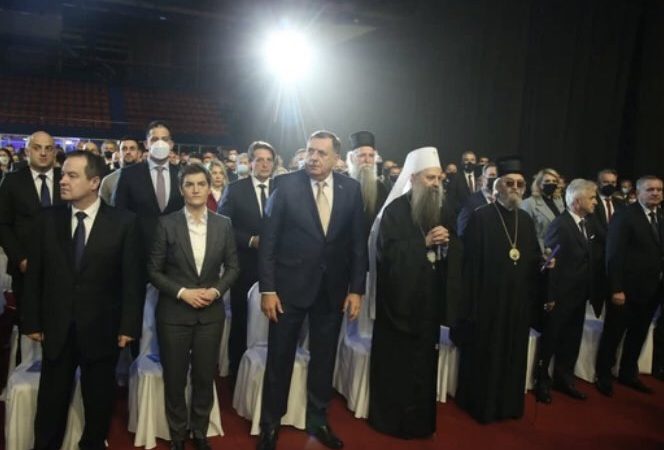 Serbian Prime Minister Ana Brnabić attended the “Days of Republika Srpska” celebrations in the Serb half of neighbouring Bosnia, an inflammatory extravaganza condemned by the European Union. There, she praised Republika Srpska (RS) as “a synonym of peace, stability and safety”, in contrast with “instability prevailing in Europe”.

On Tuesday (11 January), European Commission spokesperson Peter Stano said the EU executive regretted having seen “partners supporting such actions, such rhetoric and such behaviour, because this is threatening regional stability and good neighbourly relations”.

“Those partners, who have been providing such support, know who we mean, so there is no need to single them out,” he said, without mentioning names. “If the partners in the accession progress continue with such behaviour, it will reflect on their efforts to get closer to the EU,” Stano added

The Commission warned in a statement on Monday that the Bosnian Serb leadership risks sanctions and a loss of aid should it continue to incite tensions among Bosnian communities with inflammatory rhetoric like the one used during the celebrations of RS statehood day on Sunday.

9 January marks the date in 1992 when Bosnian Serbs declared independence, triggering a war in which around 100,000 were killed. It also coincides with the Serbian Orthodox Christian holiday of St. Stephan.

It was this religious component that led Bosnia’s Constitutional Court to declare the holiday illegal as it discriminated against the region’s Catholic Croat and Muslim Bosniak communities.

“The EU firmly condemns the negative, divisive and inflammatory rhetoric used by Republika Srpska leaders during the celebrations of 9th of January this Sunday,” a spokesperson for the European Commission said in Monday’s statement.

Such behaviour is in complete contradiction with efforts to join the EU, a perspective that can only be based on a united Bosnia, according to the spokesperson.

His secessionist rhetoric has encouraged Serb nationalists who have in recent days provoked incidents across the RS, firing in the air near mosques during prayers, publicly praising convicted war criminals and threatening their Muslim neighbours.

Bosnian Serbs held public celebrations with an armed police parade on Sunday, defying a top court’s ban of the commemoration and US sanctions slapped last Wednesday on Dodik.

Taking part in the parade were more than 800 armed police officers, including members of anti-terrorist units, gendarmerie and cavalry, who marched alongside students, war veterans and athletes through the streets of the region’s largest city Banja Luka.

All similarities between Karadzic’s hostile takeover of Banja Luka in 1992 and Dodik’s paramilitary parade today are entirely intentional. pic.twitter.com/FqZtJ0oGMz

Marchers and onlookers waved Serb red, blue and white flags while members of a special police unit sang songs referring to the Serb Republic as the state of Christian heritage.

Ana Brnabić, Serbia’s prime minister, was among several Belgrade officials who attended the Day of Republika Srpska celebrations on Thursday.

⛔️ Just couple of days after the US announced additional sanctions on Dodik, #Serbia’s PM Brnabić and other senior officials together with Russian Ambassador attend the unconstitutional “Day of Republika Srpska” festivities.

According to media reports, Brnabić said that “in the era of instability that we live in, what the events in Europe and the world show, Republika Srpska is a synonym of peace, stability and safety for you.”

Serbia, she added, has a duty to take care of the Serbs wherever they lived. A similar policy, which can be used as an excuse for invasion, is professed by Vladimir Putin’s Russia.

Brnabić mentioned what she called the unfortunate events in the region, especially in Montenegro, following the new law on religious freedom and communities, which the Serbs saw as a discriminatory regulation for their Orthodox Church.

“Regardless of all challenges, Serbia and Serbs must continue their pro-active and wise policy on cooperation with all in the region in preserving the Serb identity. We must not fall for provocations,” she warned.

Although Serbia is officially a candidate for EU membership and has started accession negotiations, the country takes liberties with its foreign policy and geopolitical sympathies. The Commission’s reactions to Dodik’s extravaganza made no mention of the obvious support it had received from Belgrade.

The Serb regiment of Bosnia’s joint armed forces, which had been deployed in the parade in previous years, did not take part. Instead, the focus was on the militarised police force, which led the parade with specially-designed combat vehicles as helicopters hovered above.

The 1995 US-brokered Dayton peace agreement ended 3-1/2 years of ethnic warfare in Bosnia, dividing the Balkan country into two autonomous regions – the Serb Republic and the Federation dominated by Bosniaks and Croats.

The formation of the country’s joint armed forces (OSBiH), incorporating Serb, Croat and Bosniak troops that had fought each other in the war, has been praised as the greatest achievement since the conflict ended.

Dodik has recently threatened to pull the Serb component out of the forces and form an exclusively Serb army within Bosnia.

“There is no freedom for the Serb people without the state,” Dodik, who is currently the Serb member in Bosnia’s tripartite inter-ethnic presidency, told the crowd watching the parade.