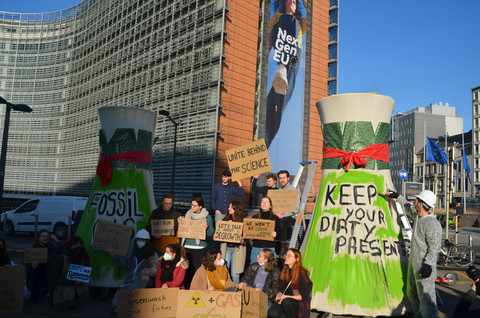 Experts and activists have warned the European Commission that including natural gas and nuclear power in its plan for sustainable finance will lead to further greenwashing, split financial markets and undermine the bloc’s climate objectives.

The draft proposal, released late on 31 December, would see certain investments in gas and nuclear included in the so-called EU taxonomy, under the category of “transitional economic activities”.

But Sébastien Godinot, a senior economist from WWF Europe and a member of the commission Sustainable Finance Platform, warned on Thursday (13 January) that the text contains “major inconsistencies” with the scientific requirements set out in the EU rules on sustainable finance.

Gas power plants with construction permits granted before 2030 would be taxonomy-compliant if they emit 550kg of carbon dioxide per kilowatt of the facility’s capacity over 20 years and if they replace more-polluting power plants, among other technical criteria.

He argued that “declaring gas as green is like declaring that French fries are salad”.

“This is not based on science. [And] if this is based on science, there is a very, very liberal interpretation of what science is,” he added, arguing that experts’ opinions have not been considered ex-ante before drafting this proposal.

Hoepner’s reckoning shows that the taxonomy, as it stands, would not align with the “fit for 55” objective to reduce CO2 emissions by 55 percent by 2030. Instead, it provides merely a ‘fit for 38.5’.

Earlier this week, the Institutional Investors Group on Climate Change, whose members represent $50 trillion [€44 trillion] of assets under management, said that the inclusion of gas in the EU taxonomy “would seriously compromise Europe’s status as a global leader in sustainable finance”.

Meanwhile, the inclusion of nuclear power in the EU taxonomy is seen as a win for French president Emmanuel Macron in his re-election bid in the upcoming presidential elections.

France has pushed for the inclusion of nuclear power in the taxonomy together with gas by forming a coalition with governments in southern and eastern Europe defending the role of gas in the decarbonisation of the EU’s economy.

However, Austria and Germany have strongly rejected the inclusion of nuclear power under the proposal — with Vienna threatening suing the commission if it goes ahead.

“This is entirely a political deal,” said Godinot, arguing that France is giving up its climate leadership and making it more difficult for the EU to reach their 2030 and 2050 climate targets.

All technologies covered by the taxonomy are subject to the ‘do no significant harm’ principle plus the precautionary principle, but experts have questioned whether nuclear power falls under this basis.

While nuclear energy does not produce greenhouse gas emissions, managing radioactive waste is costly and problematic.

“Nuclear is a profit to the managers and shareholders [but] a risk to the people,” said Hoepner.

Additionally, experts have warned that the inclusion of gas and nuclear in the taxonomy would confuse investors and split financial markets.

“This taxonomy, if not modified heavily, would split financial markets between some good-faith investors or banks committing to net-zero and others bad-faith investors who are willing to use this opportunity to go on with ‘business-as-usual’,” said Godinot.

He also argued that this system would create “a headache for sustainable investors”, because they will have to report that gas or nuclear investments are deemed ‘green’ – while not finding this credible themselves.

The draft taxonomy has triggered discontent not only among experts and sustainable investors but also among green groups, like the youth-led organisation FridaysForFuture, which protested in front of the Berlaymont in Brussels on Thursday to show their dissatisfaction with the proposal.

“There is nothing transitional by locking us into energy sources like gas and nuclear for the next decades,” youth activist Chloe Mikolajczak told EUobserver.

“What we see now is another demonstration of greenwashing and failed promises by the commission at a time where we need to be focusing all our efforts on increasing renewable capacity in a spirit of climate justice and just transition,” she added.