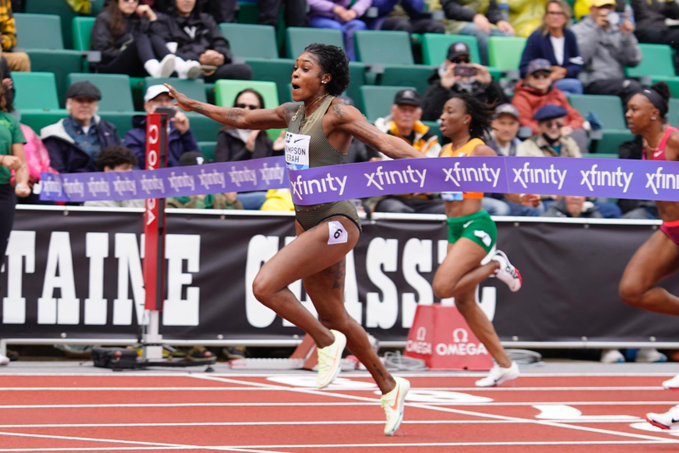 On June 9, the Golden Gala Pietro Mennea returns to Rome’s Olympic Stadium, its classical venue – and the fields are stellar. Special is the women’s 200 meters loaded with champions, but also both sprint hurdles by women.

The Ethiopians are there in all the distance races and home star Tamberi goes in the men’s high jump. It will be interesting to see Athing Mu in her European Diamond League debut.

How to Watch the Rome Diamond League Livestream

200 meters (non-DL) – Kenny Bednarek has the fastest season’s best at 20.21 and is one of three athletes in the field with sub-20 lifetime bests. Olympic 4×100-meter gold medalists Eseosa Desalu, Lorenzo Patta and Filippo Tortu also compete.

5000 meters – All of the top Ethiopians will be in action including Selemon Barega, Berihu Aregawi, Yomif Kejelcha and two-time world champion Muktar Edris. Top non-Ethiopian entrants include World and Olympic medalist Mo Ahmed from Canada and Kenya’s Nicholas Kimeli.

3000-meter steeplechase – World leader Lamecha Girma will be looking to return to winning ways after finishing second in Rabat. He faces a field including Ethiopian teammate Getnet Wale and Conseslus Kipruto, who is returning to form.

High Jump – Gianmarco Tamberi will have his home show. Barshim is a late withdrawal due to injury issues. An Interesting entry is young Israeli Yonathan Kapitolnik.

Shot put – World champion Joe Kovacs takes on a field which includes world indoor champion Darlan Romani and a strong Italian contingent including Nick Ponzio. Could the meeting record of 21.97 meters be in danger?

Discus – Kristjan Ceh takes on the top three at the Olympic Games again – Daniel Stahl, Simon Pettersson and Lukas Weisshaidinger. The meeting record of 68.78m could be bettered.

100-meter hurdles – World leader and Olympic champion Jasmine Camacho-Quinn is the big favorite after clocking 12.43 into a headwind in Chorzow.

400-meter hurdles – Femke Bol will be looking to improve on her 53.94 in cool and wet conditions in Hengelo on Monday.

Pole vault – Olympic champion Katie Nageotte will be looking to return to form after no-heighting in Rabat. Sandi Morris, Ekaterini Stefanidi, Holly Bradshaw and Tina Sutej will also be in action.