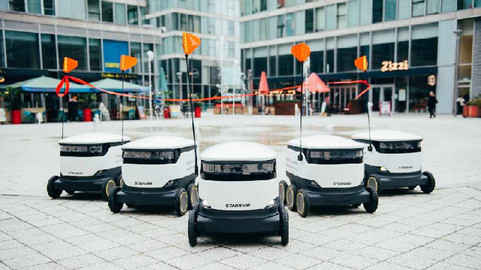 The European Investment Bank (EIB) on Tuesday (25 January) invested €50m into a fledgling San Fransisco start up making autonomous delivery robots – despite the controversial nature of the technology.

Starship Technologies, a producer and operator of autonomous delivery robots based in tech capital San Fransisco, produces small box-like delivery vehicles that self-drive around cities. The company has made more than 2.5m commercial deliveries globally since its inception in 2017.

It has a substantial deployment in the neatly-gridded town of Milton Keynes in the United Kingdom.

But it has yet to be rolled out at scale in continental Europe, with small operations in Hamburg and Tallinn, Estonia, where the company has its primary research and development site, which explains the sizeable financial EIB investment, that has been facilitated as a venture loan.

“This EIB funding for Starship is a great example of how the Investment Plan for Europe can boost innovation in Europe,” economy commissioner Paolo Gentiloni said on Tuesday.

According to Gentilioni, the investment will add to “Europe’s ever-growing and vibrant research, technology and innovation ecosystem.”

According to Starship Technologies CEO Alisdair Westgarth, the EIB funds will be used to hire engineers in Europe.

The company is a market leader in the autonomous delivery sector. It has raised a combined €50m in the past from other investors based in the US and Japan.

The EIB views electric delivery robots made by Starship Technologies as a sustainable alternative to motorised transport driven by humans.

“Electric vehicles in all shapes and sizes will be part of our future and can be a key part in the sustainable transport puzzle,” EIB vice-president Thomas Östros told press.

Covid-19 has also been good for the growth of autonomous delivery systems. Starship Vehicles has been cited as one solution for companies to get food to customers during a lockdown. The list of partners already includes grocery chains Coop, Budgens, and Tesco in the UK.

But Starship Technologies has yet to launch in its hometown San Fransisco, where opinions of autonomous delivery services are more complicated.

Autonomous delivery robots have to go door-to-door, cross sidewalks, evade cyclists, playing children and dogs of all sizes – an enormously complicated task that has in the past led to problems in the past.

When Marbel, a similar service, launched in 2017, reports of confused robots amassing in cul-de-sacs, blocking sidewalks or nearly running over pets quickly followed.

Within months, the city had adopted stringent regulations limiting operators to three vehicles and banning robots from sidewalks. “To wait for something to happen is silly,” San Fransisco lawmaker Norman Yee told Wired magazine at the time.

The problem confronting many lawmakers is a lack of data. As a result, it is hard to predict risk with new technologies.

Delivery vehicles of different sizes will impact the narrow historic streets of Europe’s city centres, but there is a lack of understanding of what the impact will be.

In a 2019 research paper commissioned by the European Commission’s directorate-general for research and innovation, Nikolaos Gavanas, assistant professor of transport planning at the University of Thessaly, highlighted this uncertainty.

Although in optimistic tone, he advised lawmakers to assess the effect of autonomous vehicles on their specific cities in advance.

The Starship Food Delivery app is available for download on iOS and Android.