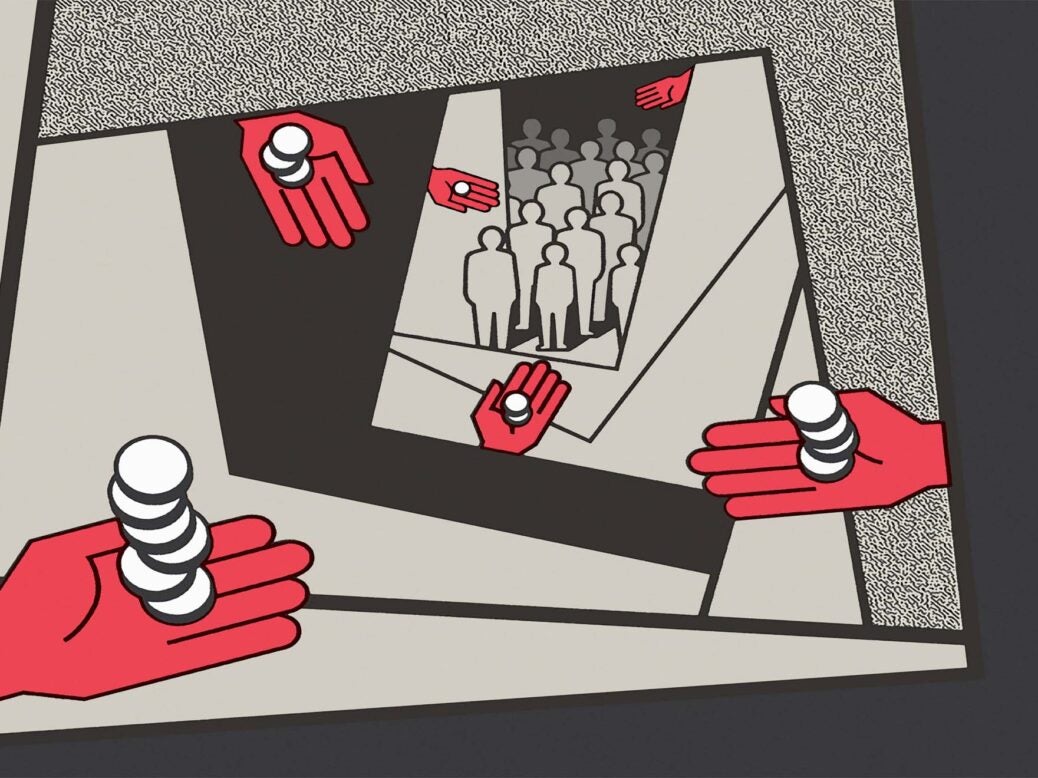 In February 2020, academics at three UK universities attempted something for the first time: to draw a “riches line”. Rather than a “poverty line”, which is a baseline for just enough money to live on, this would calculate a ceiling for too much money.

National “poverty lines” are calculated across the world, and the World Bank measures a daily per capita “international poverty line” – the global absolute minimum needed to survive each day.

The concept dates from when the Victorian social researchers Charles Booth and Benjamin Rowntree began at the turn of the 19th and 20th century to draw a “poverty line” for the minimum amount necessary for a family to live on in London and York, respectively.

The 2020 “riches line” study, called “Living on Different Incomes in London: Can public consensus identify a ‘riches line’?” and written by researchers at Loughborough and Birmingham universities and the London School of Economics, began by trying to work out what being “rich” means for people in different wage brackets.

Its results, which I wrote up for the New Statesman that month, showed that people in London – a location chosen because of its rife and visible inequality – can easily identify what makes a household rich, but struggle to agree on where to draw the “too rich” line (ie at what point wealth and income become excessive).

When I published that piece, a number of readers asked whether it would be possible to work out how people define “rich” in Britain as a whole, rather than just in the capital.

[See also: Britain’s highest-earners are more likely to believe their salary is the result of “hard work”]

Without a team of university researchers at hand, the New Statesman instead put similar questions to a weighted sample of 1,500 voters aged 18 and over across Great Britain on 8 December 2021, in an exclusive survey carried out by Redfield & Wilton Strategies.

What is the average salary in the UK?

We discovered that a third of the British public underestimate the average UK salary. According to the latest figure from the Office for National Statistics, median annual pay for full-time employees was £31,285 for the tax year ending 5 April 2021.

Does my salary make me rich?

What class am I?

We also ran a list of crude “class markers” by our respondents, some inspired by the topics discussed in focus groups in the original “riches line” study, to work out what makes people upper, middle and working class in the eyes of British voters.

Class markers that Britons associated most with being “upper class” include:

“Going on multiple overseas holidays a year” (58 per cent)

“Having hobbies like art collecting and horse riding” (56 per cent)

“Eating out multiple times a week” (46 per cent)

“Having a financial adviser” (40 per cent)

Class markers that Britons associated most with being “middle class” include:

“Having enough savings to get through sudden income shocks, such as losing one’s job or being sick for a period of time” (50 per cent)

“Going on skiing holidays” (45 per cent)

“Having private health insurance” (43 per cent)

“Having a financial adviser” (40 per cent)

A majority of respondents associated the occupations head teacher (56 per cent), doctor (55 per cent), academic (54 per cent), and banker (51 per cent) with being “middle class”.

A plurality of respondents also most associated being a teacher (44 per cent) and being a journalist (41 per cent) with being “middle class”.

Class markers that Britons associated most with being “working class” include:

“Flying with a low-budget airline, such as EasyJet or Ryanair” (52 per cent)

“Buying furniture from a charity shop” (46 per cent)

“Buying furniture from Argos” (45 per cent)

“Eating out only for special occasions” (43 per cent)

Is my salary related to what class I am?

When asked if someone who has a low-paying job can be “upper class”, more people responded yes (41 per cent) than no (36 per cent), and 23 per cent didn’t know.

When asked if someone with a high-paying job can be “working class” or “middle class”, 60 per cent said yes, while 21 per cent said no (19 per cent didn’t know).

A number of class markers suggested in our survey were dismissed as not indicating a social class by more respondents than not:

“Walking as a transportation habit” (64 per cent)

“Cycling as a transportation habit” (57 per cent)

“Having a Netflix, Spotify or equivalent subscription” (51 per cent)

“Playing a musical instrument during your free time” (49 per cent)

“Watching Freeview but not having entertainment subscription packages” (49 per cent)

“Taking taxis, Ubers or equivalent as a transportation habit” (47 per cent)

“Having a gym subscription” (45 per cent)

“Buying furniture from Ikea” (40 per cent)

A plurality of respondents (37 per cent) also said the occupation of author was not a class marker, compared with 36 per cent who replied it was “middle class”, 27 per cent “upper class”, 11 per cent “working class” and 8 per cent that didn’t know.

These results do not amount to a new definition of social classes or what “rich” or “poor” means. Yet they do indicate how wealth, social status and lifestyle interplay with salary in the minds of British voters.

These are the perceptions crucial to any political party advocating for taxing wealth, attempting to target “working-class” voters, or trying to decide where to pitch a tax on high earners.