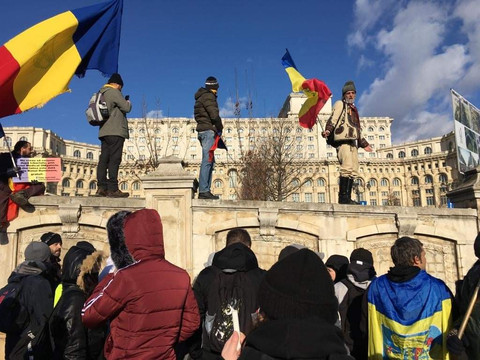 In scenes reminiscent of January’s US Capitol attack, protesters illegally breached the gates and made it inside the courtyard of Romania’s Parliament on Tuesday (21 December).

The protesters, demanding that the use of Covid-19 health pass not be extended to the workplace, tried to force their way into the Senate building itself – but were stopped by law enforcement officers who blocked all doors and barricaded MPs inside.

“The people gathered outside have been made to think that there is a vote happening today to establish the Covid-pass at workplaces across the country. The draft bill hasn’t even made it pass the special committees, let alone make it to a vote,” a Romanian MP told EUobserver.

“This kind of manipulation has catastrophic consequences, killing tens of thousands and making millions sick. I wonder how many Covid dead placed their trust in these populists politicians who lie and manipulate for some extra votes”, MP Iulius Marian Firczak continued.

The protest was organised by the far-right populist party the Alliance for Romanian Unity (AUR), only founded in 2019, but which made a surprisingly strong nine percent showing and fourth-place in 2020’s parliamentary election.

The party is strongly against Covid restrictions and against the law that would make a certificate mandatory at the workplace.

The bill is not yet on the parliament’s agenda, but still under discussion within the ruling coalition.

AUR co-founder, George Simion, said that as the doors of parliament were blocked, he was asked by fellow MPs how to exit the building. The AUR leader claims that he told them that they should first go to the rostrum of the parliament and give assurances that they will not vote for the introduction of the health certificate.

Later, Romania’s internal affairs ministry issued a statement confirming that the protestors who had entered the courtyard of the Palace of the Parliament had been kept from entering the building.

There were unconfirmed reports of some damage. According to one MP, cars belonging to the US and Japanese ambassadors were vandalised.

One senator told local media that that the Japanese ambassador had been unable to leave parliament due to protesters in the courtyard.

Other MPs, trapped inside, called for the interior minister to resign over the lack of action against the protest. Dacian Ciolos’ USR party claimed that protesters managed to jump the fences and vandalise cars, without police officers trying to stop them.

Some of the protesters continued their march and made their way to other government buildings with banners, chanting “Freedom Without Certificates.”

The health pass, the bone of contention for these protestors, which shows that the bearer has either been fully-vaccinated, has tested negative during the previous 48 hours, or has recently recovered from the disease, was introduced in Romania in late October and is required to enter restaurants, shopping centres, non-essential shops, cultural venues, swimming-pools and gyms.

This move came as hospitals were overwhelmed with Covid cases, in one of the EU’s least-vaccinated countries.

Earlier this year, Romania was the first in the EU to lift restrictions and relax other measures, but next-to-last in terms of vaccination rates.

Plummeting vaccine interest in Romania comes from a long-standing mistrust in authorities, vaccine-scepticism, plus officials’ poor approach in dealing with the virus.

In addition, Romania has both the EU’s worst and most under-funded healthcare system, according to the Euro Health Consumer Index and Eurostat.