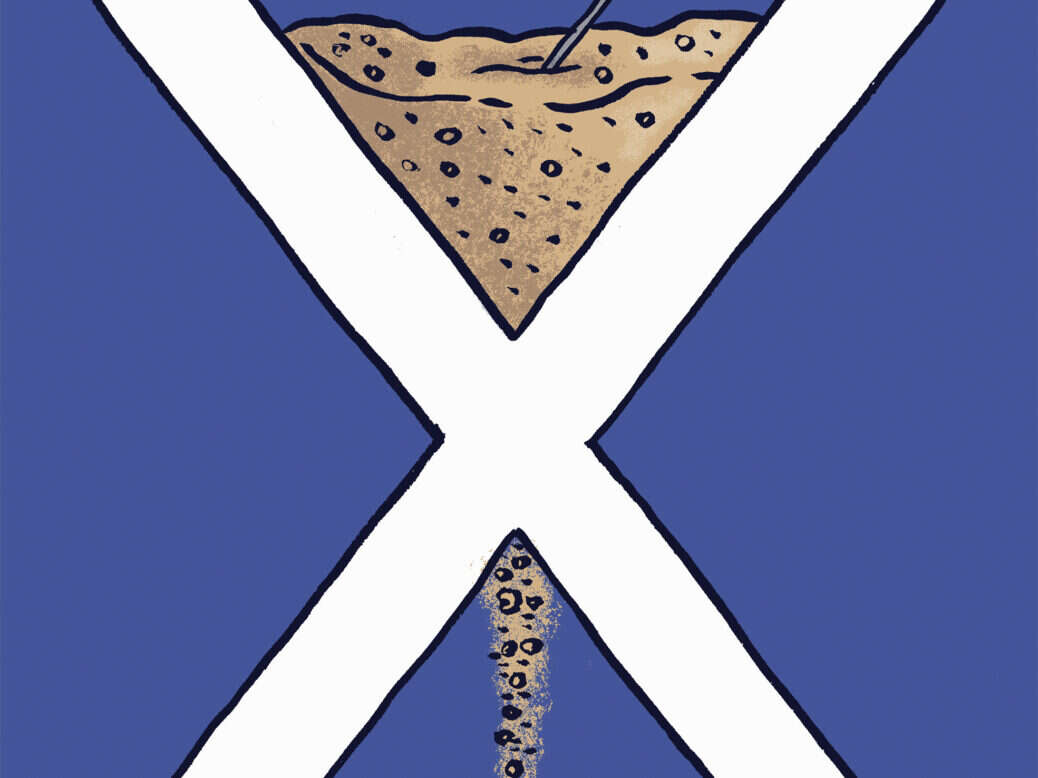 For all the uncertainty surrounding the Omicron variant of Covid-19, the strain has also brought with it a wave of familiarity as the country settles back into routines that are becoming well known. Swabbed nostrils, cancelled plans and the daily wait for data and restrictions are no longer strange to us; this Christmas the new rituals went hand in hand with the old ones – there were jokes about Advent calendars stocked with lateral flow tests.

Even the politics of Covid-19 now seems to run like clockwork: in the Guardian, Keir Starmer’s former communications director Ben Nunn recalls typing “one rule for them” into a press release in May 2020, when the former Downing Street aide Dominic Cummings broke lockdown restrictions with a road trip to Barnard Castle. A year and a half later, as Omicron hit the UK, Starmer fetched those rhetorical fairy lights from the attic and twisted them around the government again, amid revelations about a series of potentially rule-breaking Christmas parties in Downing Street and Westminster last year.

In Scotland (as well as Wales and Northern Ireland) another Covid-19 ritual is being performed. Nicola Sturgeon’s devolved Scottish government has responded to the Omicron variant by strengthening its guidance and restrictions so that they are stricter than those in England, and it has done so with a finger of blame pointed south. Announcing new guidance for the public and businesses on 14 December, Sturgeon suggested that “our public health response is curtailed by lack of finance”. Without further funding from the UK Treasury, there were insufficient resources to support the hospitality sector through a tougher pandemic approach.

This is just one of the various ways in which Sturgeon and the SNP have used the Covid-19 crisis to shore up their political capital after a gravity-defying 14 years in power. It’s not just “playing politics”. If politics during the Covid pandemic has a predictability to it, that’s because the machine of British governance works to produce such tensions.

Sturgeon is right that Scotland’s devolved power to shut down large parts of the economy is not matched by the financial firepower needed to support those sectors. The requisite economic heft can only come through the UK Treasury. In the first lockdown this took the form of a minimum funding guarantee that gave devolved authorities wiggle room beyond the usual regional and national proportions allocated via the roughly population-based Barnett formula.

The way that devolved and reserved powers are arranged reflects the wider logic of devolution: so long as the most important levers remain with Westminster – such as the immense revenue-raising capabilities of the UK Treasury – then power will reside there in the final instance, especially in a crisis. It is the old, familiar story of paying the piper and calling the tune.

[see also: What Scottish nationalists could learn from Wales]

Some unionists will argue that there is nothing wrong with this, and that the set-up has been proved effective at least twice, first in the 2008 financial crisis and then by Covid-19, when the UK Treasury could be called upon to save the whole country from ruin. But just because the UK has the technical capacity to do the right thing, doesn’t mean we should rely on the assumption that it will. Such an assumption has survived two global crises in which governments across the UK have found at least some ideological common ground. But the trajectory of the UK, visible during post-crash austerity and in the scale and speed of pandemic restrictions, suggests the kind of ideological divergence that makes devolved reliance on central government a recipe for conflict and discontent.

Last week, a report co-authored by the Institute for Fiscal Studies (IFS), the Fraser of Allander Institute and the University of Stirling Management School identified considerable room for improvement in the devolved fiscal frameworks. For the current phase of the pandemic, the report recommended either a return of minimum funding guarantees for devolved governments or expanded borrowing powers, so that Scotland, Wales and Northern Ireland can avoid an uncertain wait for England’s next moves. It also calls for HMRC to investigate the feasibility of geographically specific furlough and self-employment income support schemes, which would either be paid for by devolved governments or by central government if certain thresholds, such as hospitalisation rates, are exceeded.

In the longer term, the report has further recommendations to make the fiscal framework more resilient in a crisis, many of which deal with unexpected shortfalls and expenses. Scotland’s annual borrowing limit could be doubled to £600m to address errors in forecasting tax revenue and welfare costs. Devolved governments could borrow for discretionary spending, and they could be allowed to build up and deploy larger reserves of emergency funds. They might also be permitted to defer the effects of unexpected drops in funding.

Taken together, these measures would help to decentralise some of the power held by the UK Treasury in a crisis, and lighten some of the strain that such crises place on devolution. Yet funding is only one problem with the UK’s strange, lopsided machinery of territorial governance. Ongoing ad hoc structural adjustments are an inevitable component of devolution, which is itself part of an ad hoc process of constitutional reform.

And such recommendations also illustrate the fundamental limits of devolution, which has always been framed in two contradictory ways. On the one hand, legislative devolution is seen to have emerged from a critique of what the constitutional historian Peter Hennessy called the “good chaps” theory of government. This held that British politicians were generally decent, and could be trusted with the near-absolute sovereignty that still rests with whoever controls the UK parliament. Devolution was supposed to protect places such as Scotland and Wales from the kind of overbearing central authority they experienced under Margaret Thatcher.

Yet devolution was also a subtle manifestation of “good chaps” theory. The responsibility for further adjustment to devolution still rests with Westminster, whose ultimate sovereignty was largely unspoiled by the arrival of new assemblies underneath it. If devolution is a “process, not an event”, as it is often described, then that process relies on a UK government that is committed to ongoing reform. The most revealing section of the IFS report is its emphasis on “a change in culture at both UK and devolved government levels”. In other words, if the people in charge aren’t committed to making devolution work, there is no guarantee it will.

Devolution ultimately depends, when the chips are down, on the chaps being good. When the chaps are so obviously bad, and change is so obviously needed, to whom can the devolved peripheries turn? It is easy for the SNP to answer that question, but hard for Keir Starmer. The Labour Party faces a delicate balancing act: it has to persuade the English public that the people in charge are corrupt and untrustworthy, while simultaneously indicating to the Scottish public that Boris Johnson is not just the latest predictable product of a corrupt and untrustworthy political system.

[see also: What would the downfall of Boris Johnson mean for Labour in Scotland?]