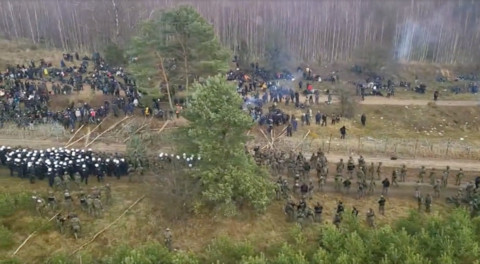 Rights group Amnesty International has documented numerous beatings, by Belarus guards, of migrants after being forced back into Belarus from EU states.

They describe cases of “serious torture or other ill-treatment”, including those who had sought asylum in the EU member states but were then forced to return into Belarus.

Among the examples are people being chased by dogs, beaten with batons, and forced to cross freezing rivers.

Others were deprived of food and water and squeezed into fenced “collection sites” on the Belarus side, before then being “violently forced to cross into Poland”, they said.

They were then pushed back into Belarus – where the process was repeated again, they said. EU law requires authorities to make individual assessments of asylum claims.

The report comes after suggestions by the European Commission for people to also seek asylum in Belarus amid legislative proposals that NGOs say weaken EU asylum rights.

The International Organization for Migration (IOM) says at least 21 people have died during the border crisis with Belarus.

Among those is the death of a six-months pregnant Kurdish woman earlier this month.

She had been stuck in the forests between Poland and Belarus before dying in a hospital. Her unborn child also perished, leaving behind siblings and a father.

That local toll adds to the total of 2,720 people killed in their attempts to seek refuge in the whole of the EU so far this year, the deadliest year in the region since 2018.

The figures also come amid wider police efforts in the EU to crack down on social media accounts encouraging others to take the trip to Belarus.

The Hague-based police agency Europol, also on Monday, said some 455 social media accounts had been targeted with the help of authorities from Lithuania, Latvia, Estonia, Finland, Poland and Germany.

“These accounts have been referred to the online service providers with the request to review them against the terms of service,” it said, in a statement.